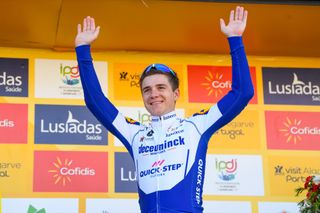 At the age of just 20, and in only his second professional season, Deceuninck-QuickStep's Remco Evenepoel continues to surprise and impress – and his latest achievement, carried out on Monday, is to have ridden the famous Belgian cobbled climb of the Muur van Geraardsbergen 50 times in one day.

During cycling's shutdown, Evenepoel has proposed a number of 'challenges' to keep himself busy, and one of those was to climb the Muur van Geraardsbergen 10 times by bike. However, the Belgian ended up cancelling his plans to tackle the Muur last week after concerns that too many people would come out to watch – which was not part of the plan during the ongoing coronavirus pandemic.

On Sunday, Evenepoel rode the 256km distance of the postponed Liège-Bastogne-Liège, which this season should have been the first Ardennes Classic of his career. Instead of resting the next day, Evenepoel then went out – unannounced – to tackle the Muur van Geraardsbergen, and ended up riding it 50 times, rather than his originally planned 10.

Lefevere: Evenepoel will follow a different race programme in 2021

Evenepoel posted a picture of his bike computer afterwards, which showed a riding time of over eight hours, and a distance of 216.9km.

"Done and dusted! Tough one!" he wrote.

According to HLN.be, Evenepoel would have ridden a huge 5,145 vertical metres. The practice of 'Everesting' – the considerable achievement of climbing the height of Mount Everest by bike – requires riders to notch up 8,848 vertical metres, which puts the size of Evenepoel's effort, the day after riding the distance of Liège-Bastogne-Liège, into perspective.

Belgium is one of the countries in Europe – unlike France, Spain and Italy – that has remained open to riders being able to train outdoors during the COVID-19 restrictions.

Evenepoel had notched up 12 race days this season before competition stopped, and won the overall classification at both the stage races he took part in, winning a stage and the GC at the Vuelta a San Juan in Argentina and two stages and the overall title at Portugal's Volta ao Algarve.