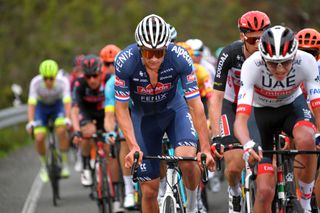 Eddy Merckx has tipped Mathieu van der Poel to become a Tour de France winner in the future if he shifts his attention more fully to the road. In an interview with Het Nieuwsblad, Merckx spoke admiringly of the cyclo-cross world champion, who made a sparkling debut in the Classics last spring, when he won Amstel Gold Race and placed 4th at the Tour of Flanders.

Van der Poel has yet to make his Grand Tour debut, though the Dutchman has suggested that his Alpecin-Fenix team might lobby for an invitation to the postponed 2020 Tour de France, which has been rescheduled for August 29-September 20.

“He will fall short in the high mountains against [Tadej] Pogacar and [Egan] Bernal, but if Geraint Thomas can win the Tour, Van der Poel can do it too. However, he will have to focus more on road races and less on mountain biking. Although of course he might have his own ideas about that.”

Van der Poel won his third cyclo-cross world title in February but raced just once on the road in 2020 – placing 45th overall at the Volta ao Algarve – before the coronavirus pandemic saw competition suspended in March. The 25-year-old had planned to target the Spring Classics this season, as well as the mountain bike event at the Tokyo 2020 Olympics, since postponed to 2021.

The UCI has since drawn up plans for a revised racing calendar in the hope that competition can resume in August, though French sports minister Roxana Maracineanu told Eurosport last week that it “won’t be the end of the world” if the Tour de France does not take place this year. She also said that the first sporting events to be held after the current lockdown would do so either behind closed doors or with strict restrictions on the number of spectators.

Speaking to Het Nieuwsblad, Merckx expressed his opposition to the idea of a Tour behind closed doors.

“A Tour de France without an audience is simply not a Tour de France,” Merckx said. “The people on the side of the road are not part of the race, are they? Don't get me wrong, I also hope the Tour can continue. I understand that it is important for the riders and the teams. But for me personally, I’d rather no Tour than a Tour without an audience. I would find that pathetic.”

Merckx’s fellow countryman Remco Evenepoel (Deceuninck-QuickStep) was one of the most successful riders in the opening part of the 2020 campaign, winning the overall titles at both the Vuelta a San Juan and the Volta ao Algarve. The 20-year-old was slated to make his Grand Tour debut at the Giro d’Italia in 2020. The race is now planned for October as part of the UCI’s revised calendar.

“He still has to prove it all. Last year, he won San Sebastian at a time in the season when the rest may have been a little tired,” Merckx said. “Of course, he has a lot of capacities, but the road is still long, you know.”