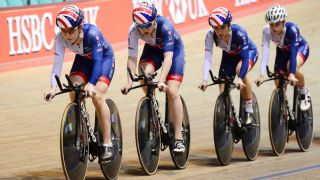 British Cycling will place a third of its workforce on temporary unemployment, as the national federation braces itself for losses of £4m due to the COVID-19 coronavirus pandemic.

CEO Julie Harrington announced the decision on Wednesday to furlough 90 members of staff through the UK’s new Job Retention Scheme, which sees the state cover 80 per cent of an employee’s wages. The scheme is designed to avoid redundancies and protect businesses by allowing them to remove employees from the payroll while there’s no work for them to do.

Harrington herself will take a 10 per cent pay cut, along with the other members of her leadership team.

British Cycling is partly funded by public money through UK Sport, although, unlike some national federations, it has had strong sponsorship income in recent years through HSBC, and it also generates income from organising races.

CAMS-Tifosi sponsorship not impacted by coronavirus

"British Cycling is a not-for-profit organisation with any revenue we generate invested into the sport. Because a significant part of that revenue comes from events – including a proportion of entry fees and other associated payments which go toward administering the sport – and because the majority of cycling events take place over the spring and summer months, we are planning for a significant drop in income of around £4million," said Harrington.

"At this stage, 90 roles – around a third of the workforce – will be furloughed, the majority in April and some in May. This is a tough decision we have taken with care. We know that it may mean difficulties for some employees who are being furloughed so we have put in place measures to support them, including offering financial advice and access to learning and development tools.

"Employees who are being furloughed are among those we will rely on to ensure our sport can return with strength and, while they cannot work for British Cycling during this period, they are still part of our team."

The financial difficulties posed by the coronavirus pandemic come at a particularly awkward time for British Cycling, who are looking for a new sponsor after HSBC announced in February it would bring an early end to its backing.

The financial organisation had recorded a drop in profits and decided to pull out after the 2020 Olympics and Paralympics, four years into an eight-year partnership.

With the Toyko Olympics pushed back to 2021, British Cycling will be desperate to secure new backing in order to be able to prepare for Tokyo to the level that has brought them so much success on the track at recent Games.