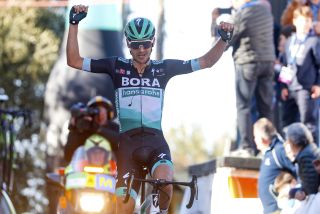 Bora-Hansgrohe confirmed on Monday that Max Schachmann, Emanuel Buchmann, and Gregor Mühlberger will start the Tour de France, set to begin on Saturday in Nice. Their participation was in question after all three sustained injuries during their racing re-start in August.

The team confirmed that, because of their injuries, they would be racing "under different conditions than originally planned".

"All three riders have done a superb job with the intensive rehabilitation measures we have implemented over the last few days – this is, after all, also what makes a world-class athlete," said Jan-Niklas Droste, who is part of the Bora-Hansgrohe medical team.

Schachmann suffered a broken collarbone after a driver veered onto the course in the final kilometres of Il Lombardia and cut him off. He managed to remount and finish seventh in the race but his season was at risk after he was diagnosed with a broken collarbone.

"The fracture to Max's collarbone has developed very well over the last few days," said Droste. "We have the necessary stability to at least give it a try with him. He has been training on the road again for a few days now, and everything is proceeding according to our expectations. However, Max’s preparations were undoubtedly interrupted by this injury. Cycling is not only about having the legs – the rest of the body must also be in good shape."

Schachmann said he was disappointed to start the Tour de France with injuries, however, he was also pleased that the team decided to allow him to adjust his goals and start in Nice. He could play a key role, alongside Oss and Pöstlberger, in Sagan’s attempt to win an eighth points classification green jersey.

"Of course I would have liked different conditions," Schachmann said. "But I'm still happy that the team has confidence in me despite my injury, and has given me the opportunity to race the Tour. I’ve been training as well as possible over the last few days and I hope I’ll be able to really take on the race and deal with the pain.”

Buchmann and Mühlberger crashed out of the Critérium du Dauphiné on the descent of the Col de Plan Bois after just 29km into stage 4, however both riders escaped fractures.

Buchmann suffered serious cuts and abrasions, while Mühlberger injured his wrist. Droste confirmed that both Buchmann and Mühlberger are healing from their respective injuries and should be recovered enough to start the Tour de France on Saturday, but that they won’t yet be pain free.

"Emanuel’s bruises and hematomas have proven to be quite persistent. He had to take a complete break for a few days and thereby lost crucial training time. From a medical perspective, his injuries are following a normal time progression, so if this continues in a similar manner, we’ll be on the right track ahead of the Tour. Physically, however, he will certainly not be in optimal shape at this point," Droste said in a team statement.

"Gregor likely emerged the least affected. We were able to exclude a severe injury of the wrist, which would have required extended immobilisation or even surgery. He is still experiencing pain, however, he is able to train again, with a special splint."

Buchmann, who finished fourth overall at the Tour de France last year, was heading into this edition as the team’s main general classification contender. He said the injury has been a setback and that his will need to take the race one day at a time.

"This has been a bitter setback. I actually thought that the Tour was over when I couldn't get up on my own after the fall. But luckily nothing was broken," the 27-year-old Buchmann said. "I concentrated on therapy last week and could only get back on the bike at the end of the week. Over the weekend, training didn't go as I would have liked. This entire incident has really set me back. To suffer a fall like that was such a shame because I was in really good shape. At the Dauphiné, I was the strongest on the mountain behind [Primož] Roglič, together with [Thibaut] Pinot.

"Now there are a few question marks hanging over my head, especially since the race is about to kick off in earnest so soon. There’s no time for a transition, because on the second stage, we’ll already be heading into the mountains. We’ll just have to wait and see how far I can make it up there. I can only tackle the Tour from day to day now.”