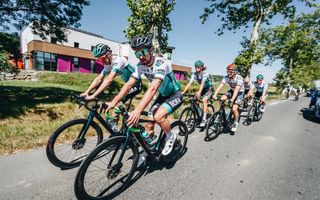 The Bora-Hansgrohe team have confirmed they will have a 27-rider roster for the 2020, with 22-year-old neo-pro Patrick Gamper named as the final signing for the German WorldTour team.

Last week, Bora-Hansgrohe confirmed that Sam Bennett would leave the team after a drawn-out battle legal. The Irish sprinter is widely expected to join Deceuninck-QuickStep for 2020.

Pascal Ackermann: I'm still not one of the best sprinters in the world

Peter Sagan has already announced he will ride the Giro d'Italia and Tour de France in 2020 after a spring Classics campaign. Bora-Hansgrohe will have to combine Sagan's and Ackermann's ambitions in the Tour de France sprints and Buchmann's hopes of repeating or improving on his fourth place overall last July.

Gamper was the last rider to be confirmed on the Bora-Hansgrohe roster.

"I have to say that making the move to the WorldTour has come as a fantastic surprise for me, which is made all the more exciting by joining my dream squad, Bora-Hansgrohe. I have immense respect for the task that lies ahead," Gamper said.

"Riding in the WorldTour is going to be a different experience, however, with one of the top teams in the peloton, the transition to this new level of racing should be a smooth one. I am really looking forward to discovering the environment surrounding the team."

Team manager Ralph Denk said: "Patrick is a young rider who possesses good qualities above all on the flatlands as a rouleur. He will be useful in strengthening our sprint train and will serve primarily as a helper within the team.

"Of course, we will also be aiming to develop him further and improve upon his strengths. We will provide him with the necessary time required to gather experience, which will be a process that will also occur during one or the other of the Belgian races. As an Austrian, he is sure to integrate into the team quite quickly, with our roster already consisting of a few of his compatriots."