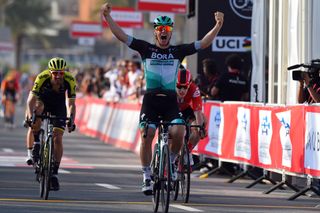 WorldTour teams Bora-Hansgrohe and Israel Start-Up Nation have been confirmed for the Sibiu Tour in Romania, which will take place on the rescheduled dates of July 23-26. CCC Team were also due to participate but the change in date means that the WorldTour outfit has instead been replaced by its development team.

The Sibiu Tour was originally fixed for July 2-5, and the 2.1-ranked event was set to be the first race on the UCI calendar to take place following the hiatus from competition due to the coronavirus pandemic.

Earlier this month, however, the Sibiu Tour organisers announced that the race had been rescheduled for late July, citing concerns about ongoing travel and quarantine restrictions in Europe in light of the COVID-19 pandemic.

Ackermann: We hope to win more by splitting calendars with Peter Sagan

The first international event of the revised UCI calendar is now set to be the one-day Grand Prix Erciyes in Turkey on July 11, while WorldTour competition will resume with Strade Bianche on August 1.

Pascal Ackermann and Patrick Konrad are set to lead Bora-Hansgrohe in Romania, while on Wednesday, the race organisation listed Matthias Brändle as a likely partcipant for Israel Start-Up Nation. The local challenge will be led by Eduard Grosu (Nippo Delko One Provence) and Serghei Țvetcov.

The four-day race takes place in Sibiu county in Transylvania, and gets underway with a 2.5km prologue time trial in the historic centre of the city of Sibiu. The opening road stage features a stiff summit finish at Bâlea Lac, while the rolling terrain on stage 2 is likely to favour breakaway attempts.

The race concludes with a 12.5km mountain time trial to Păltiniș on the final morning ahead of a flat 109km stage around Sibiu in the afternoon.

The Sibiu Tour was first held in 2011 and Tour de France champion Egan Bernal won the overall title in 2017 when he raced for Androni Giocattoli-Sidermec. Other past winners include Victor de la Parte (2012), Davide Rebellin (2013) and Ivan Sosa (2018). Last year’s event was won by Kevin Rivera (Androni-Sidermec).