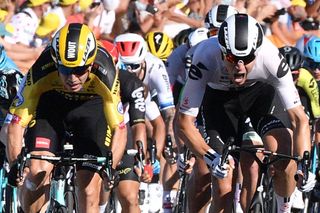 Sunweb's Cees Bol only narrowly missed out on what would have been his first Tour de France stage victory on stage 5 in Privas on Wednesday when Jumbo-Visma's Wout van Aert came off his wheel in the final metres to take the win.

Bol was given what appeared to be the perfect lead-out by his teammates, and as 'last man' Casper Pedersen pulled over to the right, leaving the inside of the gentle, final bend for Bol to come through, Van Aert – who'd been pinned to Bol's wheel – was forced to go around Pedersen on the right, but still came away with the victory, despite having had to take the long way around.

"From five kilometres to go, we took the front, and all the guys were super strong," Bol explained on his team's website. "It was amazing to see and to feel the confidence from the team; I think everybody did an amazing pull.

"I still did a good sprint in the end, and we didn't make any mistakes, but unfortunately in cycling you don't always get what you deserve as a team because there was one guy faster at the end," he admitted.

"In the end, Wout was just a bit faster in the finale. Of course, it's a bit disappointing but if we keep riding like this, I have confidence that we'll get it."

The 25-year-old Dutchman, who joined Sunweb in 2019 from Continental squad SEG Racing Academy, took three wins during his first season with the team last year – at the Nokere Koerse and at stages at the Tour of California and the Tour of Norway – and added another victory earlier this season when he won a stage of the Volta ao Algarve.

After third place on the Tour's opening stage in Nice on Saturday, seventh on stage 3 to Sisteron on Monday and now second place in Privas, Bol has shown that he has the capacity to win a stage this year, and he and his team are already looking for his next opportunity.

"The guys were brilliant today," said Sunweb coach Matt Winston. "I think you could say that it was a perfect lead-out; everyone was in the right place, and it was really impressive.

"We prepared for today's stage really well, so we knew what to expect, and so that we could fine-tune the plan over the last few days and this morning," he added. "We're really focused on strengthening dedicated blocks of riders, and here we have a strong, dedicated selection for the lead-out.

"We've learned a lot from the first few sprints, and the efforts have really paid off. Second is great; I think we can reflect on it and say it was pretty text book, and next time we'll still be going for a top result again in a few days' time," said Winston.