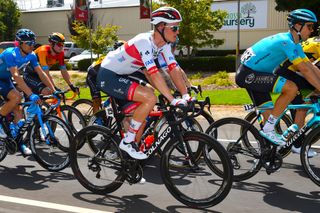 Mikkel Bjerg in the Tour Down Under peloton for his debut with UAE Team Emirates (Image credit: Bettini Photo)

Eschewing talk of riding a Grand Tour in his debut season on the WorldTour, UAE Team Emirates neo-pro Mikkel Bjerg said he and his team are taking this season race by race and he will focus the early part of his season on time trials and the one-day races in Belgium.

"I really hope to perform well in the TTs during the year and just try to make the best of it, to try and learn something from every race," the three-time U23 time trial world champion told Cyclingnews' Stephen Farrand last week in Australia at the Tour Down Under.

Bjerg, who rode the past two seasons with Axel Merckx’s development team Hagens Berman Axeon, said he will race his first time trial in the UAE Team Emirates kit next month in Portugal at the Volta ao Algarve.

"For now, I do Algarve and then I'll try to focus a bit more on the one-day races in Belgium," he said.

The 21-year-old Dane won his first U23 time trial world title in 2016 when he was riding for the Giant-Castelli Continental team. He moved to Hagens Berman Axeon when that team jumped to the Pro Continental level in 2018, and he repeated his world championship feat.

Bjerg returned with Hagens Berman Axeon in 2019 and grabbed his third U23 time trial world title as well as having the third-best time in the UCI Hour Record behind Victor Campenaerts and Bradley Wiggins.

He signed with UAE Team Emirates at the end of the 2019 season and made his debut with the team at the Tour Down Under, working to support sprinter and fellow Hagens Berman Axeon alumnus Jasper Philipsen and the GC aspirations of teammate Diego Ulissi, who finished second.

"For sure here with UAE it has been a hard race," Bjerg said when asked about making his debut with the WorldTour team. "Also, it's early in the year, so I think it was good to get the dust off and sit in the peloton. I really enjoyed this week."

Bjerg said that although he finds racing with UAE Team Emirates on the WorldTour "not such a big difference" as with Axeon, the early start to the season was definitely new.

"For sure it's different to be racing in January when you are used to racing in March or something," he said. "I think it's still a long way to top shape."

Nevertheless, Bjerg said, he's ready to get to work on what he hopes will be a long and prosperous pro career.

"Here on the WorldTour there are so many guys who are capable of performing really well and actually winning stages and races, so for sure it's going to be a really hard next 10 years," he concluded.