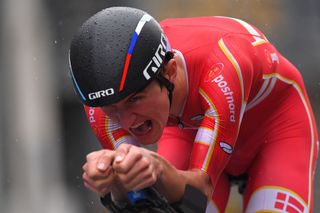 After clinching his third consecutive U23 time trial world title, Mikkel Bjerg confirmed that his plans for an attempt on the UCI Hour Record have been postponed, and he is now aiming to take on Victor Campenaerts’ benchmark “within three years”.

The Dane, who stormed to an unprecedented triple amid torrential rain and pools of surface water in Yorkshire on Tuesday, had originally planned to take on the record at some point after the World Championships.

However, his plans have been revised since the summer, and he will instead try for a Danish record on October 6 before working towards the official UCI-sanctioned record with the help of UAE Team Emirates, with whom he’ll turn pro next year.

“I want to see what I can do with my top shape. I’m the best I’ve ever been, so I want to see how close I am to Victor’s record,” Bjerg said in his Worlds-winning press conference in Harrogate on Tuesday.

The Danish Hour Record, once held by Bjerg, now stands at 53.975 kilometres, set by Martin Toft Madsen earlier this year.

“We have this little game where he beats the Danish Record, then I take it back, and back and forth,” Bjerg joked.

As for Campenaerts’ official UCI world record, taken from Bradley Wiggins in April with a distance of 55.089km, Bjerg simply wants to get a measure of his potential, even if it wouldn’t count were he to end up going further than the Belgian.

“I’m probably not going to beat it. If I do really well, I’ll probably get just above 54km, but at sea level, if I beat Victor’s record that would be crazy,” he said.

As for when he might attempt the world record, he has discussed the situation with UAE Team Emirates, and they’re going to work together and build a more long-term project so as to take it on with full preparaton.

“There there has to be more testing done,” Bjerg said, “but I really hope within in the next three years with UAE that I will go for the world record.”

Bjerg’s stunning time trial prowess has been impossible to ignore, and he’ll turn pro in 2020 at the age of 21. His world titles, and their margin of victory – today’s 27 seconds to Ian Garrison was the slimmest of the three – have meant there were no shortage of options for joining the WorldTour.

In the end, he went with UAE Team Emirates, who are investing heavily in youth since the arrival of Joxean Fernandez Matxin as team manager. Bjerg will be joined next year by Brandon McNulty, who he’s knocked to the lower steps of the podium in two of the past three Worlds, along with U23 Giro d'Italia champion Andres Camilo Ardila, and U23 Giro fourth-place finisher Alessandro Covi.

Tadej Pogacar turned pro with UAE this year and recently finished third overall and won three stages at the Vuelta a Espana, and it was another UAE neo-pro, Jasper Philipsen, who won a stage of the Tour Down Under in January, who persuaded Bjerg to sign up.

“I’m really good friends with Jasper Philipsen. I spoke with him and asked, ‘How come this is such a good team for you?’ because sometimes we have the same mentality when it comes to racing,” Bjerg revealed.

“He said, ‘This team is really good’ and suggested I should join. I think they can give me the perfect set-up to develop as well as possible.”

Despite his dominance at U23 level, Bjerg insists he has a long way to go when it comes to learning the WorldTour ropes, and warns against expectations of emulating the instant impacts made by the likes of Pogacar, Egan Bernal (Team Ineos), and Remco Evenepoel (Deceuninck-QuickStep).

“Time trialling and road racing in the WorldTour… there’s a big difference. When I do time trials, I feel really confident, and when I do road races… I’ve done the Tour of California twice now, and it’s really hard racing. The general fitness of everyone in the bunch is really high, so I really need to train this winter to prepare.

“It seems it’s more easy for young guys to perform really well, but I’m not sure why. It almost seems like if you’re 20, you need to win some crazy big race. I’ll just try to take my development one year at a time.”