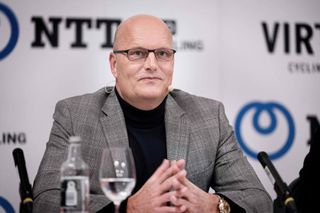 Last week it was reported that the future of the team is under threat, with the IT company's contract as title sponsor expiring at the end of 2020. A report from Wielerflits suggested that no extension was forthcoming, and the search for a replacement was not bearing fruit.

Earlier in the year, the team was reportedly attempting to extend the deal with NTT, while Danish window brand Velux was rumoured as a potential sponsor after Riis signed on as team manager at the start of the season.

Speaking to Het Nieuwsblad, Riis said that it's a situation he has been in before, during his time as manager of the CSC/Saxo Bank squad.

"I am confident," he said of the ongoing sponsorship search. "I've experienced this before.

"We hope to have news soon. In the meantime, your media will have to keep speculating."

The team had hoped to use the Tour as a way to attract potential sponsors, but the team's lead sprinter Giacomo Nizzolo abandoned on stage 8 due to leg pain. Edvald Boasson Hagen has taken their best result, finishing second on stage 7 in Lavaur.

"It's not rocket science," Riis said of their plan "The situation is not optimal."

"We haven't had any luck yet," he added in reference to the abandons of Nizzolo and Domenico Pozzovivo, "but we keep fighting."

Only a handful of NTT's riders are under contact beyond this season: Domenico Pozzovivo, Victor Campenerts and neo-pros Matteo Sobrero, Dylan Sunderland and Samuele Battistella.

The team's out-of-contract riders have reportedly started to look elsewhere, with just four months to go until the 2021 season gets under way.