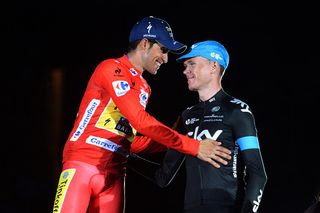 Alberto Contador (Tinkoff) and Chris Froome (Chris Froome) on the podium of the 2014 Vuelta a España (Image credit: Getty Images)

Two-time Tour de France winner Alberto Contador has said it's "unthinkable" to him that Chris Froome would jump ship and leave Team Ineos during the 2020 season, but argued that a future move away from his 10-year home would have to be considered if Egan Bernal moves to the top of the team hierarchy.

Cyclingnews recently broke the news that Froome, who is out of contract at the end of the year, was in discussions with other teams, which included the possibility of a rare mid-season move.

Froome, who says he is fully recovered from the injuries he sustained last June, is chasing a record-equalling fifth Tour de France title but faces an internal leadership battle at Team Ineos, with Egan Bernal and Geraint Thomas, the last two winners, both chasing the yellow jersey again this summer.

"Froome has so much experience – he has won the Tour four times – so he knows how to deal with difficult situations and obstacles," Contador said on Spanish Eurosport's La Montonera programme.

"In terms of this season, for me, it seems unthinkable that he would consider changing teams," he said

However, the 2007 and 2009 Tour de France winner went on to argue that the leadership headache – and Bernal in particular – would give Froome grounds to consider a move at the end of the year, when his current contract with Team Ineos ends.

"Another thing is that, at a given moment, if the Tour comes around and it's the first mountain stage, and Egan Bernal makes a statement of intent and gets ahead, and he [Froome] sees he has no other option but to work for Egan, because Egan has been stronger… In that case, yes, he might consider a 'plan B'," Contador said.

"If he's really looking for a sporting project to win the Tour again, and he doesn't stamp his authority early in the race, and Ineos move away from him because Bernal, for example, is superior, then perhaps he has to consider it [changing teams].

"It would not be because of team strategy or financial reasons; I suspect it would be about ambition and trying to get that fifth title and make history at the Tour de France," he said.