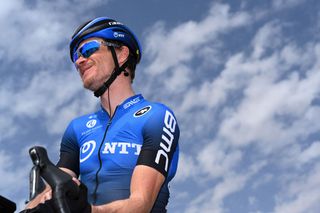 NTT Pro Cycling's Ben King returned home to the US from his European base in Tuscany after the coronavirus pandemic halted all racing. While Italy's hospitals are strained and the death toll there has topped 6,000, the American said he feels more at risk at home than he did in Italy.

King described his experiences in a blog on Flobikes.com, recounting the 'six stages of Covid' after three weeks of quarantine in Italy followed by a mostly empty flight through "eerily quiet and sterile" airports and further quarantines at home in Virginia.

"I'm grateful to be home and closer to family, but honestly I feel more at risk in the USA than I did in Italy based on a mere 24 hours of observation," King wrote.

"I'm still not afraid for myself but for the sake of those vulnerable to the virus. Please don't take your freedom for granted. It's still your choice to take appropriate measures."

King recalled how most people in Italy thought the virus was China's problem until it quickly became theirs, writing: "I know you might think I am overreacting. One month ago, I would have too. But, we just experienced all of this. I don't want to preach or come across self-righteous, but I've seen where we are headed and it's not pretty."

He listed six stages of reactions to the coronavirus pandemic, writing, "I observed the same stages of reaction in a diverse range of cultures and admit that I was not immune to all of them. I hope my hindsight provides you with some foresight to make good choices."

The stages he observed were first downplaying the problem, denial that the Covid-19 disease is serious, being annoyed at the inconvenience of pubs and restaurants being closed, followed by nervousness, working from home or being laid off but still meeting friends outside. The fifth stage, government-enforced quarantines leads to judging others for going out and increasing paranoia followed by fear and anger when the reality that behind the numbers are real people dying.

"From what I've seen in the countries being hit hardest attitudes have followed these trends," King wrote. "Here are the facts. Many COVID-19 carriers are asymptomatic. Each positive person infects three others. The USA has not carried out nearly as many tests as Italy (implying what I believe to be much higher numbers) and yet we have one of the highest rates of transmission."

King wrote of his surprise when he landed in the US and saw "parking lots were packed full of people carrying on as though nothing had changed. For them, it hasn't… yet.

"It's too late to stop it, but there's still time to make a difference. This isn't Italy's problem. It's ours too. It's my problem and it's yours."