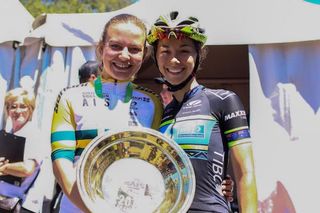 Tibco-SVB have announced the addition of Australian road race champion Sarah Gigante to the team in 2020. The American outfit revealed their full 13-rider roster that includes five new riders in a team press release on Wednesday.

"Our 2020 team is a strong mix of experience and raw talent," said Rachel Hedderman, Head Sports Director for Team Tibco-Silicon Valley Bank. "We are looking forward to developing our new riders and providing all our riders the opportunity to achieve their potential."

Gigante won the 2019 Australian Road National Championships, securing both the Elite and U23 titles, in addition to the U23 time trial title. In 2018, she was first in the U19 Australian National Championships in the road race, time trial and criterium. Gigante is currently in her first year at the University of Melbourne and is part of the university's Elite Athlete Program.

The team has also hired Colombia's Diana Peñuela, who joins the team from Ale Cipollini. She has more than seven years of experience as a professional cyclist and spent three seasons with UnitedHealthcare. In 2018, Peñuela placed third at the UCI Winston Salem Cycling Classic, and won stages in both the Joe Martin Stage Race and the Tour of the Gila.

The team has hired two American riders in Erica Clevenger and Kristen Faulkner. Clevenger is an all-around rider who won the 2019 Redlands Sunset Road Race. She is pursuing a graduate degree at the Colorado School of the Mines. Faulkner is a Harvard rower now working in Venture Capital. She is embarking in her first year as a professional cyclist. She won races in California that include Madera Stage Race, the Brisbane Criterium and the Watsonville Criterium.

New Zealand's Jenelle Crooks joins the team after spending three seasons with Mitchelton-Scott (2016-2018). She was part of the team that was third in the team time trial at the Giro Rosa (2017) and won the youth general classification at the Internationale Thuringen Rundfahrt der Frauen (2015). She took a season off but will return to racing with Tibco-SVB during the Australian season.

"I am incredibly excited by the roster we have put together for 2020," said Linda Jackson, founder of Team Tibco-Silicon Valley Bank.  "Our philosophy has always been to do our best to hire not just great athletes, but great people. We have a terrific group of women, and I am looking forward to seeing what we can do as a team in 2020."