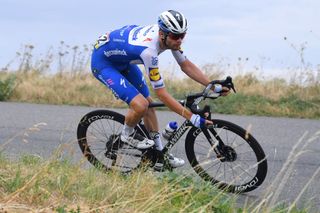 Deceuninck-QuickStep's Kasper Asgreen and UAE Team Emirates' Sven Erik Bystrøm took the men's road race titles at the Danish and Norwegian national championships, respectively, on Sunday, and will wear their national champions' jerseys for their WorldTour teams for the rest of the season and into next year.

Asgreen is the reigning Danish time trial champion – with the 2020 titles against the clock having been postponed – and added the road race crown to his palmarès in Middelfart on Sunday afternoon, winning by nine seconds from Riwal Securitas rider Andreas Kron, while Asgreen's Deceuninck-QuickStep teammate Michael Mørkøv, who's held the title for the past two seasons, completed the podium by leading home a large chase group.

"The race was very hard. We had a lot of showers, the course was tricky, and to add to all this, the action started early, with 80 kilometres to go, when some teams decided to put pressure on the peloton," explained Asgreen – who won Kuurne-Brussel-Kuurne earlier this season – on his team's website.

"Our team stayed calm and attacked only with 50 kilometres to go," he continued, with both Mørkøv and teammate Mikkel Honoré making it into the key move. "Then I escaped together with Kron and accelerated in the last kilometre, opening a gap on that technical part in the city.

Asgreen continues to soar up QuickStep hierarchy with Kuurne victory

"This victory makes me so happy," Asgreen said. "A big thanks to my teammates; we rode perfectly and I couldn't have done it without them. I can't wait to ride in this nice jersey."

In Norway, Bystrøm outsprinted Uno-X's Jonas Iversby Hvideberg and Lotto Soudal's Carl Fredrik Hagen to take the title in Royse, and thanked UAE teammate – and 2007 and 2011 national champion – Alexander Kristoff for his help in securing the title.

"For me, it was a special win," 28-year-old Bystrøm said on his team's website. "I have been second before [in 2017], and the difference from winning is huge.

"I'm really happy to be on the top of the podium again," he added. "I also want to thank Alex Kristoff for the way he was riding. We shared the work and we were able to bring home another national champion's jersey to our team."

The 2019 Norwegian road race champion, Amund Grøndahl Jansen, did not attempt to defend his title as he instead continues to train with his Jumbo-Visma teammates in the French Alps for the coming weekend's Tour de France, having become a late call-up for the squad to cover for Steven Kruijswijk, who fractured his shoulder in a crash at the Critérium du Dauphiné.