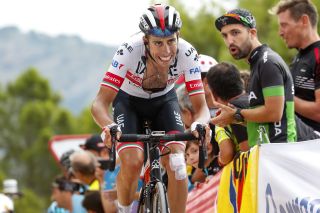 Fabio Aru has hit back at those who think he will never again fight for victory in Grand Tour, saying he believes he can take on young talents such as Egan Bernal and Remco Evenepoel because he has raced successfully against "giants of the sport such as Contador and Chris Froome when he was at his very best."

Aru has endured a difficult two years, with an undiagnosed iliac artery problem affecting his performances after joining UAE Team Emirates in 2018. Last April he opted for an angioplasty stent operation instead of major surgery.

That allowed him to make a rapid return to racing, and he finished 14th overall at the Tour de France after only two months of training. He went on to ride the Vuelta a España but struggled with fatigue and was diagnosed with Epstein-Barr syndrome.

Some doubt Aru will return to his best, especially after his angioplasty stent operation, but he showed his pride when the doubts were put to him.

Aru: Something was missing all year

"I wish my critics would say things to my face, so that I can understand if they really know what I've been through," Aru told La Gazzetta dello Sport after recently brecoming a father and starting his preparations for the 2020 season – the last of a three-year contract with UAE Team Emirates.

"I know it's been a long, difficult moment and I'm the first who is unhappy about it. But there's an explanation for it all.

"I've lost two years of my career but it wasn't my fault. I'm also convinced that I can get back to my best, fight in major races, be up there on the climbs and so silence my critics."

UAE Team Emirates have patiently waited for Aru to recover, even if he made mistakes during his recovery.

His original plan after his angioplasty stent operation was to gradually return to form and target the Vuelta a Espana. But Aru wanted to use the Tour de France to rebuild his form and then pushed himself too much in Spain, eventually quitting the Vuelta a España before stage 13. UAE Team Emirates medical director Jeroen Swart cited Aru's "growing fatigue" and "considerable muscle damage."

"In hindsight, I perhaps asked too much of my body," Aru admitted. "A virus weakened me massively in Spain and I'm still paying a price for it. I can still only ride for a maximum of two hours. I'm slowly recovering and will be back up to speed in January."

Taking on the next generation

Aru admitted he has still to decide his goals for 2020. He would like to ride for Italy in the testing Mount Fuji road race but does not know which Grand Tour he will ride. His race programme is likely to be dependent on his recovery and training in the spring.

Aru was once seen as Vincenzo Nibali's heir and the next great Italian Grand Tour rider. He was third in the 2014 Giro d'Italia and then won the 2015 Vuelta a Espana but has struggled to repeat those performances.

Many doubted Aru's ability and dedication in 2018 but he claims he is not afraid of anyone, especially the young generation that appears to be taking over the sport but he is also humble after two years of problems and setbacks.

"In the past I raced against giants of the sport such as Contador and Froome when he was at his best. Pogačar is really strong and so perhaps together we can have some fun…

"Of course, if I realise I'll never be back to my best, if I struggle and can’t be competitive, Id be happy to step down a level. But I consider that to be science fiction because I know I've got the legs to be up there with the best."