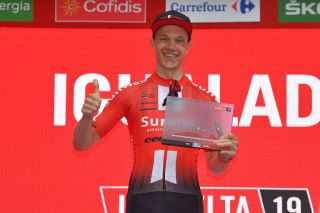 Nilkas Arndt has extended Team Sunweb’s run of success in the first week of the 2019 Vuelta a España thanks to his impressive stage win in tough weather conditions at Igualada on Saturday.

The first really rainy day of the 2019 Vuelta a España – and more rough weather is forecast  for  Andorra on Sunday –  saw the German claim the second Grand Tour win of his career after a stage victory on the last day of the 2016 Giro d’Italia, gained when Giacomo Nizzolo was disqualified for an illegal sprint manouvre.

The Vuelta a España is providing some timely success for the team, with Sunweb finishing third in the opening TTT,  Nicolas Roche wearing the red jersey for several days,  and now Arndt claiming a stage win. Meanwhile, Wilco Kelderman, 12th overall, continues to fight for GC.

Team Sunweb have had no wins since the Giro d’Italia time trial stage for Chad Haga, with just seven so far this season,  and recently much of the media attention about the team  has been focussed on Tom Dumoulin’s departure for Jumbo-Visma in 2020.

The Vuelta, though, has provided an opportunity for Sunweb to move forwards from that, and so far, in the first week, the team have seized that opportunity with both hands.

Arndt said that having his teammate Martijn Tusveld in the breakaway with him had been instrumental for his victory, with Tusveld covering early moves and Arndt able to  sit in and wait in case the victory came down to a sprint for the line – which it duly did..

“My finale started with three kilometres to go when Martijn crashed,” Ardnt told reporters afterwards. “He’d attacked before, but we could see where he’d fallen on a roundabout that was very, very slippery, and when we went past him, I knew that meant the only chance the team had of winning was me.

“We took the roundabout very carefully after that, then when the last attacks began I started following, because I wanted the break to stay together – I knew I was one of the fastest if nobody got away before," Arndt said.

“After the left corner just before the finish with 250 metres to go I just went, I kept going as hard as I could, and then when I looked back I could see I had won.”

Arndt dedicated the win to his teammate Nicolas Roche, who abandoned on stage 6 after a bad crash, saying, “I hope he could see this on TV and that he has a fast recovery."

Arndt is famous for sprinting sitting down, as he did to win in Igualada, but he explained that it is more due to his fighting for victory on tough terrain for bunch sprint rather than because he prefers that particular position.

“Today was a really hard race," he said. "That [second category] climb we had late in the stage was very difficult, but I could just get over it OK; I was only dropped in the last few hundred metres.

“But I just was not fresh enough to produce more power for the sprint . This wasn’t an explosive sprint, though it was more about going as hard as possible with the energy I had left," he said.

“I’ve won stages in the Dauphine and the Cadel Evans Race in the same way. I don’t have that acceleration to kick away, but I can produce more power seated. Also, it was really slippery today and my tyres could stick to the road surface better if I stayed sitting down.”

Team Sunweb’s focus, just like the Vuelta’s, will now return to the high mountains on Sunday. But whatever happens in the Pyrenees, the Pau time trial and indeed in  the remaining two thirds of the Vuelta, the German team can feel more than satisfied with what they have achieved so far.