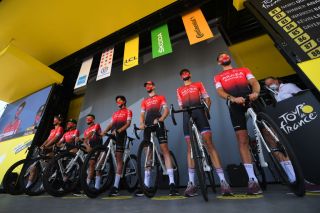 In the latest development in the investigation into Arkéa-Samsic, both staff members of the team previously held in preliminary custody were released on Wednesday evening.

Soigneur Mikel Otero and doctor Fredy Alexander González Torres had both been held in 'gardes à vue' since Monday morning after prosecutors in Marseille opened an investigation into a "small part" of the French team following a raid at the Tour de France.

Searches of the team's hotel and cars after stage 17 to Col de la Loze carried out by the Central Office for Combating Environmental and Public Health Damage (OCLAESP) turned up 100ml of saline and injection equipment.

Nairo Quintana: I don't have anything to hide

Marseille prosecutors opened a case the day after the race finished, with Nairo Quintana and his brother Dayer volunteering for questioning.

On Wednesday night, Marseille public prosecutor Dominique Laurens announced that Otero, Naito Quintana's long-time soigneur, and Torres, who was called up by Arkéa-Samsic to replace an ill doctor, had been released.

"I am informing you that the two detentions were lifted at the beginning of last night," she said, before adding that the investigation will continue.

"As I have stated several times, the investigation is still ongoing and investigative work and hearings must be carried out before the prosecutor makes a decision based on the information gathered."

On Tuesday night, team leader Nairo Quintana released a statement about the investigation, affirming his innocence and stating that no doping products were found during the raid.

"On that day the authorities entered my room and seized vitamin supplements that were perfectly legal, although perhaps not familiar to the French authorities. This is the main reason why it has taken time to clear up everything that happened," he wrote.

"To avoid any doubt, I would like to confirm that no doping substances were ever found.

"For the time being, a preliminary investigation is being carried out, I have answered all the questions and doubts and I am willing to continue doing so on a voluntary basis until the whole situation has been clarified on the basis that I have never used doping substances and no illegal substances were found in the police investigation."