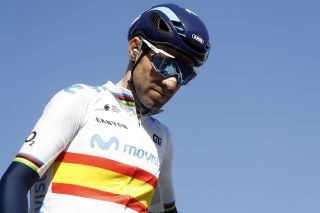 Despite the unveiling of a rescheduled autumn calendar of racing, Alejandro Valverde doubts he’ll be turning a pedal in anger again this year, and is considering postponing his retirement.

Earlier this week, with all racing suspended until July due to the coronavirus pandemic, the UCI announced that the Tour de France will take place from August 29-September 20 and be followed by the World Championships, Giro d’Italia, Vuelta a España, and a sprinkling of one-day Classics.

Valverde, however, is far from convinced that will all come to pass, and is coming to terms with the possibility of 2020 being a 'lost year'.

Peter Sagan: I'm a real cyclist, not a virtual one

Chaves: It's pretty early to reschedule the season

"Let’s see how it all evolves. There’s still a long time until the summer. It’s important that the Tour goes ahead, but seeing how things are going – not well at all – I don’t know what will happen," Valverde told Spanish newspaper El Mundo.

"It’s all very complicated. We want to have sport back but, being realistic, I highly doubt that we’ll be able to race this year. At the start of the lockdown, I didn’t entertain the idea of losing this year but, seeing how things are going, I’m thinking it more and more."

Valverde, 39, has a contract with Movistar that runs until the end of 2021, when he planned to retire. He recently confirmed he will target the Olympic Games in Tokyo next year, which was meant to be his major objective of this summer, but is now considering racing into 2022.

"We’ll see. The truth is that all this has been a drastic change, and you have to look at all sides of the equation," he said.

"It’s possible that I’ll push back my retirement, but I’m going to see how this all unfolds and then I’ll make a call."

Valverde also voiced his distaste for static indoor training. While pros in most countries are able to leave home to train on the open roads, those in Valverde’s native Spain, along with France, aren’t allowed to leave home for exercise.

"The rollers burn you out physically and mentally," Valverde said.