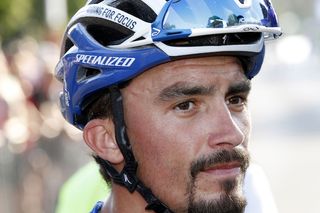 Julian Alaphilippe (Deceuninck-QuickStep) will not line up at Il Lombardia on Saturday after choosing to bring an early end to his 2019 campaign.

The Frenchman, who has won Milan-San Remo, Strade Bianche, La Flèche Wallonne, and two stages of the Tour de France this year, feels he is not in the condition needed to be competitive.

Having planned to ride Milano-Torino on Wednesday ahead of the final Monument of the season - where he finished runner-up two years ago - Alaphilippe will now hang up his wheels for the winter.

“I am really sad to tell you that I will not be racing Milano-Torino and Il Lombardia this week and that my incredible 2019 season has come to an end," Alaphilippe said.

"You know that I always give everything and have done ever since my year started in Argentina. I’ve worked really hard to try and be at my peak for a third time this year, having raced hard at the Classics and Le Tour, but I knew at the Worlds that my form is short of where I would like it to be.

"I really wanted to be with the guys in Italy and give my all for the team, but as I can’t do that, it makes sense that I start my post-season recovery now, in order to be in the best possible shape for the start of next year.”

Alaphilippe enjoyed a storming start to 2019, with two stage wins at the Vuelta a San Juan and one at the Tour Colombia before sweeping up in Italy with Strade Bianche, two stages at Tirreno-Adriatico, and then his first Monument at Milan-San Remo.

After a stage win at the Tour of the Basque Country, he capped his spring with a second straight Flèche Wallonne title. Following a break, he returned in June with a stage win at the Critérium du Dauphiné before surpassing all expectations at the Tour de France to finish fifth overall, having held the yellow jersey until the final Friday of the race.

Having fallen victim to fatigue at the 2018 World Championships, Alaphilippe vastly reduced his race programme after the Tour in a bid to be fresher for the Worlds and Lombardia. However, after struggling in the cold and wet conditions in Yorkshire, he has left himself short of the form needed to add the final flourish to his campaign.

"2019 is a year that I will never forget, and I want to thank my team, the management, the staff, my family and everyone who has supported me throughout this truly incredible season," Alaphilippe said. "I can’t put it in words how special it was to share all these beautiful moments with you all."

In Alaphilippe's absence, Deceuninck-QuickStep will line up at Il Lombardia with two-time winner Philippe Gilbert, as well as Bob Jungels and Enric Mas.