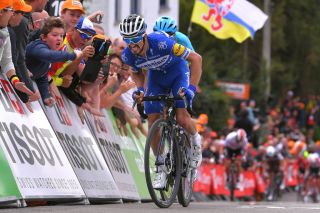 The coronavirus pandemic has put paid to Flèche Wallonne happening in its rightful spot on the calendar – the prestigious mid-week race is normally held between Amstel Gold and Liège-Bastogne-Liège – but it's a major UCI WorldTour event that is likely to be rescheduled for the autumn, which means Alaphilippe should yet get an attempt at defending his title in 2020.

"There's always more pressure when you're the defending champion, and I could feel some, but I quickly shrugged it off," Alaphilippe said on his Deceuninck-QuickStep team's website on Monday, recalling the feeling going into last year's race after having won in 2018.

"It was more a kind of positive pressure – one that motivated me and gave an extra boost of energy for that day, as I knew that I had solid condition and a very strong team around me."

One of the sport's three Ardennes Classics, and having first taken place in 1936, Flèche Wallonne is characterised by its final two circuits that take in three climbs of the famous Mur de Huy, which features a section with a gradient of 26%, with the race finishing at the top after the third ascent.

"The last time we went up the Mur [in 2019], it was different than in 2018," Alaphilippe said. "Of course, I was again in a very good position, but this time one rider decided to go from distance. I wasn't surprised when Jakob Fuglsang [Astana] went, but he opened a good gap, which I had to close and make sure I still had enough for a powerful attack. Once I came back to his wheel, I waited and did my effort as late as possible. It was a hard-earned win and it made me extremely happy."

Winning Flèche the previous year, Alaphilippe explained, had been a completely different experience, mainly because it had come as more of a shock.

"I had no idea what was happening," the Frenchman said of coming across the line at the top of the Mur de Huy to take the 2018 title. "I knew Valverde was behind me, but didn't know if there was still someone in front; I thought that some of the guys in the break had managed to remain there, so I pushed hard to be at least on the podium.

"After the finish line, I was completely empty," he said. "I'm sure you remember those images, but soon my cousin Frank [Alaphilippe's trainer, who later joined the team full-time] and the team's soigneurs came to me and told me I'd won. That kicked off a huge outpouring of emotion – an incredible feeling that I will never forget."

Although his previous victories had included two stages and the overall title at the 2016 Tour of California and a stage win at the 2017 Vuelta a España, Alaphlippe pointed out that victory at the 2018 Flèche was his first Classics win.

"I love this race – I knew it suited me to a tee – and I'd had a lot of expectations after my previous podiums," said Alaphilippe, who'd taken second place in both 2015 and 2016.

"OK, going into the race I already had some nice victories on my palmarès, but that win was more than just a win: it was a déclic – something I needed in order to continue to win and something that helped me grow in confidence. I just felt it put me into another gear.

"Winning always feels good, but I must say that my 2019 triumph felt a bit more special, as it came at the end of a highly successful first part of the season. I can't tell you how motivated I was to take advantage of my top shape and win, and I'm really glad I could do it and cap off a beautiful spring," said Alaphilippe, who last year won stages at the Vuelta a San Juan, the Tour Colombia 2.1, Tirreno-Adriatico and the Tour of the Basque Country, and took Classics victories at both Strade Bianche and Milan-San Remo – all ahead of winning Flèche.

This season's spring has been all-but decimated by the coronavirus – Paris-Nice was the last major race that took place – but it's hoped that the majority of the major races, including the big one-day Classics and the Grand Tours, will still take place thanks to a revamped calendar.