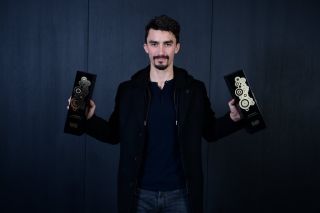 Julian Alaphilippe (Deceuninck-QuickStep) has won the prestigious Velo d'or prize for his hugely successfully 2019 season and his unique style of aggressive racing.

The Frenchman won the award ahead of Tour de France winner Egan Bernal (Team Ineos) and Vuelta a España winner Primoz Roglic (Jumbo-Visma). He won the prize for best French rider in 2018 but is the first French rider to win the Velo d'or since Laurent Jalabert in 1995. He succeeds Alejandro Valverde who won in 2018 after winning the world title in Innsbruck.

Alaphilippe also won the 2019 French award from Velo, beating Thibaut Pinot and Pauline Ferrand-Prévot to complete a rare double. On Saturday evening he was named as the French rider of the year by the UNCP French riders association.

"I am very happy with the incredible season I’ve had and to receive the Velo d’or is a beautiful way to conclude this amazing year," Alaphilippe said.

"I want to thank those who voted for me and decided that I should receive this trophy, it’s a great honour. It was an unforgettable campaign, with many beautiful moments – from winning my first Monument in March to wearing the yellow jersey for 14 days – which wouldn’t have been possible without my extraordinary squad.

"My suitcase is going to be heavy because I didn’t expect to win two prizes. But I'm very proud to have them."

The Velo d'or prize was created in 1992 and is awarded by the French cycling magazine Velo, with a international jury of journalists voting the rider considered to have performed the best over the year.

Alaphilippe won 12 races in 2019, including Strade Bianche, Milan-San Remo, Flèche-Wallonne and two stages of the Tour de France. He became a national hero in France for wearing the yellow jersey at the Tour de France for 14 days, only losing it to eventual winner Egan Bernal in the Alps when stage 19 to Tignes was cut short due to bad weather and a landslide.

Alaphilippe went on to finish fifth overall in Paris and was admired for his aggressive racing and panache.