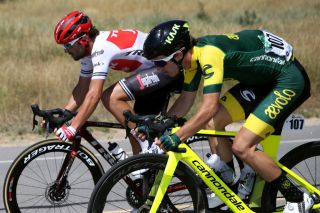 US Continental team Aevolo is looking to expand its geographic scope next season by traveling to Europe for the first time.

Over its first three years, the development team run by former pro and SmartStop director Mike Creed has established itself on the US domestic circuit and now wants to add an international element to the up-and-coming riders’ resumes.

“We just put out for a bunch of race invitation requests to see what comes up,” Creed told Cyclingnews last week in Colorado Springs. “I’ve never done that before. I’ve never taken a team to Europe.

“I just spammed every race I could, but in theory we want races that can be known result entities. There are some races that other race-trackers just know, like Tour Alsace or Ronde de l’Isard or U23 Liege-Bastogne-Liege,” Creed said. “Those are known if you win those. So stuff like that – indisputable results, basically. Like if you win Oak Glen [at California’s Redland Bicycle Classic] or the last stage at [New Mexico’s Tour of the] GIla, every director knows what that takes. Like, that wasn’t a fluke win, you know. That guy gutted it.”

Creed said the team hopes to make its first trip to Europe in April or May after starting out in January at the Herald Sun Tour in Australia, a race for which they’ve already received an invitation.

“In theory, we’d start at the Sun Tour and then come back and then make a short trip to Europe, then return for Redlands. Then we'd take a small rest, and then, depending on invitations, possibly skipping Joe Martin and coming back in time for Gila, or doing them both back to back,” Creed said. “I would love to have an exact plan, but I’m just waiting to see what my options are.”

Running a U23 development team means a never-ending crop of fresh faces, and as current riders age out, new riders are added to the mix. Turnover was heavy in the team's fourth year, and Creed has signed a host of new faces for his 2020 roster.

Returning from 2019 are Cade Bickmore, Gage Hecht, and Tyler Stites. Scott McGill, Conor Schunk and Eric Brunner joined the team at the end of this season in August for the Tour of Utah and will also return in 2020.

They'll be joined by Aidan McNeil from junior team Swift Devo. Creed saw the young rider in the breakaway at junior nationals taking on four riders from the powerhouse LUX team and was impressed with the young rider's grit.

Sean McElroy is a rider from Justin Williams' L.A. Legion criterium-focused team. Creed says the young rider has a lot of speed.

"I like guys with speed," Creed said. "It's easier to make a guy slow down and go longer than it is to make him speed up."

"We could definitely use a guy like that," he said.

The US domestic road scene, although still boasting USA Cycling's season-long Pro Road Tour series of stage races, one-day events and criteriums, offers just five men's UCI races for US Continental teams to fly their flags. The US UCI America Tour races now include the Joe Martin Stage Race in April, the Tour of the Gila in May, the Chrono Kristin Armstrong in July, the Larry H. Miller Tour of Utah in August and the new one-day Maryland Cycling Classic in September.

As a development team with a mission to send riders up cycling’s ladder, Aevolo needs a good balance of race days and opportunities for its riders to show their talents to bigger teams.

America’s premier stage race, the Tour of California, is now gone – at least for 2020
but Continental teams haven’t been eligible for the WorldTour event for past two seasons. Creed admitted to Cyclingnews that there are fewer opportunities in America for race days that can also get his riders noticed by the WorldTour teams.

“You have some endemic things that might mean something to some people, like a backbone result, but let’s say one of my riders goes and wins Gila, or gets second or third place at Gila, then they go to Utah and get seventh place overall,” Creed said.

“A WorldTour team might notice Utah and think that’s pretty good, but if that is his only result, there’s not a whole lot there. But if he has this result at Gila and then a result at the national championships, it builds a little backbone and they see a through-line; this wasn’t a one-off,” he said. “So it would be good to have those backbones, too. So if my rider got top-five at Redlands and top-five at Joe Martin and then ninth at Utah, that’s a way better string of results to sell.”