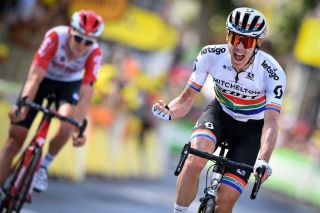 Daryl Impey has offers on the table from both Mitchelton-Scott and Israel Cycling Start-Up Nation, with both teams looking to secure his services for 2021 and beyond.

The South African is out of contract at the end of the season and is in line for the Tour de France later this year as he continues to captain Mitchelton-Scott on the road. However with Chris Froome leaving Team Ineos at the end of the current campaign and signing a five-year deal at Israel Start-Up Nation the team are looking for experienced riders to help in their quest to support Froome’s challenge for a fifth Tour de France title in 2021.

Richie Porte was initially approached by Israel Start-Up Nation as the team looked to improve their climbing unit, but the Australian veteran – out of contract at the end of the year with Trek-Segafredo – is now linked with a move to Ineos as he looks to step into a super-domestique role at Dave Brailsford’s team. Trek are monitoring the situation but are waiting until races resumes before deciding on whether to try and extend Porte's contract. The Australian rode for the Ineos - then Team Sky - and under Froome’s wing for several years until he later joined BMC Racing.

Israel Start-Up Nation have been linked with a number of other signings, including Jasper Stuyven, who recently confirmed that he would remain with Trek-Segafredo for the coming years.

Impey, 35, has been with the Mitchelton-Scott since their inaugural year as Orica-GreenEdge in 2012. He has played a vital role in their success and became the first South African rider to wear the maillot jaune at the Tour de France back in 2013. Last season he won a stage in the Tour and he has twice won the Tour Down Under but it’s his skill as a road captain that has invited interest from both Froome and Israel Start-Up Nation.

A possible move seemed highly likely a few weeks ago when Mitchelton-Scott’s future looked uncertain but with Gerry Ryan stepping up to guarantee the team's future as they continue the search for additional partners. The management at the team has been able to put together a package for Impey that would potentially let him see out his career at the team.

Cyclingnews understands that Impey is torn over the decision. A move to join Froome would provide the South African with a new challenge and a reunion with an old friend, while the best years of his career have ultimately come at Mitchelton-Scott. The South African is yet to make his decision and did not respond when contacted by Cyclingnews.