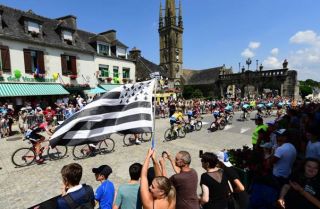 Amaury Sport Organisation (ASO) confirmed that the 2021 Tour de France Grand Départ has officially moved from Copenhagen and will now start on June 26 in Brest, Brittany. The announcement was made at a press conference at the Regional Council of Brittany in Rennes on Monday.

The Grand Départ initially planned in Copenhagen has been postponed until 2022.

The UCI announced last month that the new dates of the 2021 Tour de France would begin on June 26 and end on July 18. The new dates and location will avoid a clash with the postponed Euro 2020 football championships in Copenhagen and Olympic Games in Tokyo, Japan. The French Grand Tour will now end six days before the men's road race scheduled for July 24 in Tokyo.

ASO confirmed that all four opening stages from June 26-29 will take place in Brittany and will include stages that could influence the initial general classification and the yellow leader's jersey.

"It is said that when the wind blows, no one navigates turbulence better than Bretons. In the past few weeks, they have shown themselves to be up to the challenge and opportunity. They have also demonstrated their loyalty to the Tour de France when the skies darkened over Copenhagen," ASO wrote in a press release.

"The congested 2021 summer sporting calendar has forced the Tour's first visit to Denmark to be postponed until 2022. Instead of heading north, the 108th edition will travel west and its first stage will be held in Brest, which is only second to Paris in terms of hosting the Grand Départ. In previous Tour starts from the tip of Brittany, the way was paved for Fausto Coppi's success in 1952, Eddy Merckx's last victory in 1974, and then Carlos Sastre's in 2008.

"After the 32nd visit of the Grande Boucle in Brest, which first appeared on the race programme in 1906, the route will be laid out with the intention of exploring Brittany’s Armor coastal region and its inland Argoat territories. The diversity of the landscapes makes it possible to create selective stages and will thus put the onus on the favourites to live up to their responsibilities straight away. Details will be announced for these four all- Brittany stages during the presentation of the Tour on 29 October at the Palais des Congrès in Paris."

The 2021 Tour de France was originally scheduled from July 2-25 with the Grand Départ planned for July 2-4 in Copenhagen, Denmark. However, the final weekend of the Grand Tour would have overlapped with the men's road race at the rescheduled Tokyo Olympic Games, which were postponed this summer due to the COVID-19 pandemic.

In addition, Copenhagen is also hosting the European Football Championships, which was also rescheduled for next summer due to the COVID-19 pandemic. Concerns arose whether the city could feasibly handle a potential clash between two international sporting events, particularly if the Tour de France shifted its dates a week earlier.

Copenhagen's Parken Stadium is set to host group stage games on June 12, 17, 21, and a second-round game on June 28. Copenhagen eventually declined a request from ASO to move their Grand Depart up a week.

Breton newspaper Le Télégramme reported last month that ASO offered the region of Brittany the 2021 Grand Départ. The French region was expected to bid for the opening stages of the Tour de France for either 2024 or 2025.