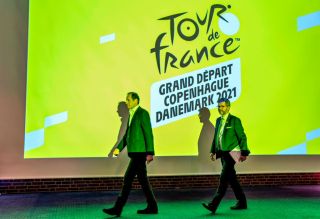 While the sports world has been halted by COVID-19 and the cycling world awaits a revised late-season racing calendar, Copenhagen is preparing for a potential clash between the 2021 Tour de France and the postponed 2020 European Football Championships next July. While some believe the city has taken on more sports than it can handle next summer, the city's mayor Frank Jensen confirmed "there is space for both" events.

"Yes, we are many who remember and miss football. We knuckle down in KBH to ensure that our city can host both EM2021 and TdF. We want to create a summer that we will never forget in 2021," Jensen wrote on Twitter.

Copenhagen announced four years ago its application to host the opening stages for the Tour de France. Last year, Prudhomme confirmed that bid, making it the northernmost Grand Départ in the event’s history. It will be the first time that the Tour de France has visited Denmark. Copenhangen is scheduled host the first three stages from July 2-4.

According to the Danish news outlet Ekstra Bladet, the organisers of the Tour de France, Amaury Sport Organization (ASO) and Union of European Football Associations (UEFA) that organise the elite international football competition are at the end stages of negotiations to be able to land an agreement so that both events can be conducted in Denmark.

Euro 2020 was postponed by one year due to the novel coronavirus. According to Sky Sports, FC Copenhagen's Parken Stadium was scheduled to host Group B games on June 12, 17 and 21, and a last-16 tie on June 28, but Danish Football Union (DBU) chief Jesper Møller told Danish media there is a "50/50 chance" of being able to host the matches.

The DBU confirmed to Sky Sports that it is concerned about securing an agreement with the City of Copenhagen, Parken and Sport Event Denmark for hosting the games. All host cities have until April 30 to notify UEFA if they can still host their games for the postponed event next July.

According to Ekstra Bladet, there are commercial interests and rights at stake, along with sponsorship and logistical matters that need to be addressed, and those could be strained by hosting the two major sporting events so close together.

The Danish Chamber of Commerce (Dansk Erhverv), however, has made it clear that there is space for both Tour de France and European Football Championships next summer.

"Of course there is room for both the Tour de France and the European Cup in 2021," Dansk Erhverv CEO Brian Mikkelson wrote on Twitter. "In fact, there is more space and more need for sports, parties and guests than ever."

Deceuninck-QuickStep director Brian Holm voiced his opinion on the matter, stating that the Tour de France has priority over the European Football Championships simply because the cycling event had confirmed dates first.

"You do not make a Tour start because of the European football championship. Cycling was there first, and then you don't care what they do about football. That's their problem. Honestly, the European Championships in football interest me less than nothing," Holm told B.T.

"You can try to turn it around. It would be similar to an European Championship next year, but that the Tour was canceled this year. And then one would choose to cancel the European Championships next year to move the Tour there. This is not how the world is connected. Just like in football, there is something called first pick. You came last.

"They can then hold the European Championships, and it is very good for Copenhagen if that happens. But if that can't be done, then they have to move the matches to Malmö [Sweden]. So, I don't care."