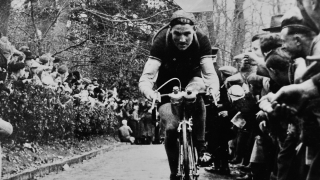 1952 Tour of Flanders winner Roger Decock has died at his home in Aarsele at the age of 93. The Belgian was the oldest living Ronde winner.

A professional from 1949 to 1961, Decock also claimed victory at Paris-Nice in 1951 and Scheldeprijs in 1954 during a career that overlapped with those of fellow countrymen Briek Schotte, Rik Van Steenbergen and Rik Van Looy.

Decock’s finest hour came in the 1952 Tour of Flanders, when he escaped in the company of Schotte and Loretto Petrucci after Louison Bobet had been caught following his attack on the Muur van Geraardsbergen. He proceeded to outsprint Petrucci and Schotte to claim victory at the finish in Wetteren.

On the previous year’s Tour de France, Decock had been an eyewitness to yellow jersey Wim van Est’s fall into a ravine on the descent of the Col d’Aubisque on stage 13 to Tarbes. He raised the alarm and stopped at the roadside to help the stricken Dutchman. Decock lay 5th overall before the stage but lost 25 minutes in the process. He finished the Tour in 17th place overall.

“I tried to inform everyone that Van Est had fallen badly, but nobody stopped, until my sports director Sylvère Maes came and asked what I was doing there,” Decock later told Het Nieuwsblad. “I told him that Van Est was down there, that he needed urgent help. Maes told me it would be all right and I had to ride on. I lost 25 minutes waiting, but I didn't care. A person in need was more important.”

Van Est, incidentally, placed 4th behind Decock in the 1952 Tour of Flanders. Speaking to L’Équipe last month, Decock expressed regret that this year’s Ronde had to be postponed due to the coronavirus pandemic.

“It’s a terrible situation,” Decock said. “It’s the first time in my life that I won’t see the Ronde. You realise that not even the war had prevented it from taking place!”

After hanging up his wheels, Decock ran a café, first in Izegem, then in Tielt and finally in Ghent. Het Nieuwsblad remembered the Ronde winner as a natural raconteur: “With his death, a fantastic storyteller about cycling during and after World War II has also left us.”

Deceuninck-QuickStep manager Patrick Lefevere was among those to pay tribute to Decock on social media on Sunday: “We have lost a legendary figure, not only the rider but also the storyteller.”

Roger De Cock, who was the oldest living winner of the Tour of Flanders, has passed away at age 93. Our condolences to his family and friends. pic.twitter.com/7L4WvF23CnMay 31, 2020

RIP Roger Decock, oldest winner of the Tour of Flanders and local cycling Hero! A born narrator about the legendary cycling world of the fifties. We will miss him! pic.twitter.com/vqYLxi0Dz3May 31, 2020