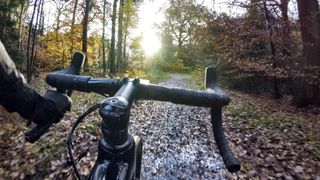 Strava has posed a very troubling question for cyclists: when does a sense of perpetual competition ruin the healthy benefits of an activity?

The bicycle has always been a metronomic escape. You found your cadence and the road - or gravel trail - became a therapy all on its own. Cycling was a world away from office politics, family issues and tension between friends.

But the cocooning influence of cycling, as the ultimate outlet of activity and transport into splendidly healthy isolation for an hour or two, has been badly disrupted by the smartphone.

The unavoidable rise of tubeless tyres

Why wider is better: The death of 23C tyres

Where a ride was once part planning and part pure chance, the smartphone has infected every ride with a possibility of interruption. This has become even worse with the advent of Strava and an obsession with competitive cycling computer statistics.

For the non-competitive athlete, riding your bicycle should provide disengagement from digital addiction. The idea that Strava is controlling your cycling mood and destiny is preposterous. At the extreme, it can only create unhappiness and frustration, as there is always a rival besting your achievements or riding more frequently than you can.

Strava has removed the beautiful mystery of riding. The unexpected route deviation. Stopping when you wish, for no reason other than impulse. Exploring routes which have not been plotted. Strava mitigates against all the childlike curiosity and sense of adventure that makes cycling such a healthy depressurisation for adults.

Is Strava pure evil? Certainly not. As a dedicated training tool, it has benefits, but like any smartphone application, it must be strictly managed to prevent addiction and affliction.

Riding is freedom, not data

Freedom of exploration is one of cycling’s greatest values. Why should you be digitally herded to follow routes made popular by virtue of Strava’s competitive zeal and the sheer scale of social media? A beautiful aspect of cycling is that you can ride as long or short as you like, and where you wish to go.

Superior wheel and tyre technology have given us greater independence for long rides (due to puncture resistance), yet it is ridiculous that Strava dictates our riding instead of vision and inspiration.

There is no question that the greatest cyclist of all time is Belgium’s Eddy Merckx. His most famous quote is perhaps the greatest argument against Strava and GPS ride data obsession: "Ride as much or as little, or as long or as short as you feel. But ride."

Social media can be beneficial or destructive. Experiences which once had intrinsic value, are now graded of worth, only if they can be shared and liked by an audience. If you allow your cycling life to be taken captive by Strava and an anonymous audience, there is a possible destiny where you won’t turn the pedals, if a ride cannot be logged or tracked.

At its worst, Strava can encourage reckless behaviour as riders battle rivals to claim segments. The worst example of this relates to the death of talented Californian engineer, Kim Flint, way back in 2010. A talented amateur rider, Flint became obsessed with Strava and was desperate to recapture a descending segment he had lost to a rival by only four seconds.

Flint died when he ran wide in a corner and collided with a vehicle in the oncoming lane. His death was a watershed moment for Strava, as Flint’s family blamed the application for incentivising thoughtless conduct. Although Strava was not found liable by the courts, Flint’s death showcased the dark side of data- and segment-obsessed cycling.

Cycling then, for the most part, should drain your energy levels but enliven your sense of being. It should purge your mind and free your imagination. The horizon or silhouette of that next hill should be your segment.

The best ride you’ll ever have will be a combination of ethereal light conditions, on an empty road, somewhere rural. You’ll feel a surge of inspiration, blitzing a seated climb on a section where you’d always had to stand on the pedals. You’ll be flawlessly off the brakes on that descent. A collection of moments which transcend the data of Strava. An achievement you’ll claim, all of your own accord.