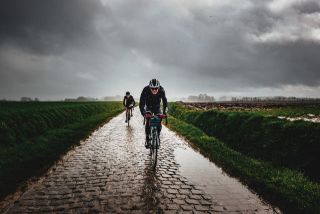 Interesting historical tidbit: Henri DesGrange, the man who started the Tour de France, actually hated teams and wanted to support the solo riders - the isolés - who were the privateers who paid their own entries, found their own housing, and were driven by their dreams of winning.

My name is Sean Christian and strange as it might sound, on some level it feels like I’m a modern-day Isolé. Why? Because as far as I can tell, I’m the only American Junior who has raced for a Belgian team the past two years. My team is Debondt Verandas, under Director Timmy Van Cleempete, we’re a family-based team that I would describe as mid-tier in the cutthroat junior scene in Belgium.

The spring of 2019 was my first race season in Belgium and my story sounds like those of most other American racers when they make the jump from the US to Europe, but especially Belgium in March and April. The experience is best summarized as: “Head kicked in, hypothermia and crashes''.

It sounds tough because it is tough but through the process, I learned an entirely different style of racing and it completely changed me as a rider/cyclist, both mentally and physically.

Don’t get me wrong – I’m not whining that it was too hard – on the contrary, it is an awesome sink-or-swim immersion into bike racing and that is why I’m missing it so much. The European racing experience is what competitive road cyclists dream about - the racing, the fans, and the fame. I was lucky enough to experience the two out of the three while riding over there and wanted to share my observations as we all rode out (no pun intended) the current crisis.

First observation – Junior racing is huge and intense! From my first race, I instantly realized that Kermesse racing is on another level compared to most racing in the US. We had maxed out fields at every spring race with National teams from all over Europe. Imagine lining up with 150 of the best riders in the world every weekend at a race you thought was going be no bigger than your local crit.

Second observation – Even if the weather turns ugly, they are not going to shorten the race. One of my early 2019 races was held in a little town called Lierde, about 40km away from Brussels and it proved a very memorable introduction to the challenges of Belgium cycling.

The race started off in normal conditions, 45°F degrees and cloudy, but after just two laps the weather changed. At first, it started raining, which is typical, so I thought no big deal. Then, however, things got intense. The temperature dropped, changing the rain to snow and none of us were dressed properly. Within a few minutes, my clothes were soaking wet and starting to freeze to my skin and there was still 60km left in the race.

As the race continued, the weather kept switching between snow and rain, and more riders were dropping out with each lap. Finally, with two laps to go, a two-man break went up the road on the climb. The peloton tried to pull them back, but we failed. In the end, it was a sprint for third but my legs were so cold I couldn't even stand up to sprint.

At the finish, I pulled off the road and fell off my bike. I was so cold that I couldn’t move, and my dad had to carry me back to the car – pretty impressive, since I weigh 150 pounds, but it felt like 500 lb with all the frozen wet clothes.

After finally thawing out I continued to race the 2019 season. Kermesses are a whole other kind of race - one that is hard to read. In my last 2019 Kermesse, everything fell into place and I had a breakthrough - I raced smarter, ending up in ninth place. It was an Interclub race with many of the top riders, so it gave me hope for the 2020 season.

To prepare for the spring 2020 season, my teammate Jack and I spent three months training in Tucson to get ready for my return to Belgium. The Saturday Shootout ride is amazing and really, really hard. Training with the likes of Cameron Beard, Gord Fraser, Ethan Overson, Alexy

Vermeulen and so many more talented athletes is awesome. Plus doing the local races and Valley of the Sun tested our fitness and we were ready to roll.

On March 1st, we left for Belgium, hoping that good results and fame awaited me. Even before the racing started, this year was off to a great start. In 2019, we stayed in an AirBnb 3rd floor attic apartment which was small and a bit isolating. So, this year we wanted something more central and ended up in Oudenaarde at the well-known cycling house called The Chainstay. It is an awesome experience.

The opportunity to live with The Chainstay owners Holly and Gregg, their daughter Evelyn, and the mischievous dog Bernie along with fellow guests Jared, Ashely and Ezra gave real energy to the house. Having people to drink coffee with each morning and to share dinner with each evening made it seem like home with a cycling family.

Our first race was on Saturday, March 7 and I had forgotten the pain and the intensity of Belgium racing. Halfway through the race, I readjusted expectations and just wanted to finish which I did in 36th. The next day’s race was in Opwijk, and I was determined to show/leverage all the work I had done and get a better result ... but then I flatted in the second to last lap. Feeling bummed but looking forward to more races the next weekend, I figured that my low point of the week had passed but boy was I wrong.

Early the next week, the coronavirus pandemic was already affecting Italy and they were in full lockdown, but in Belgium, it felt like we were on a rollercoaster. Each day in the house, we had a mad collision of happiness and uncertainty. Through our stay, we became good friends with Jared and Erza. Ashley had flown to South Africa to shoot the Cape Epic so those of us that were left became the "Chainstay Wolfpack".

During the days, Jared took us on amazing rides that we would never have found, and in the evenings, my Dad brought us together with great meals. We even secretly “borrowed” Gregg’s van to get ice cream at the Nachtwinkel but our joy ride was discovered when we accidentally left the lights on and drained his battery. Each day, we rode in uncertainty wondering - Will we race this weekend? Are they going to cancel the classics? Slowly but surely the answers rolled in – no more racing. Jack’s family wanted him home ASAP, so he was the first to leave on March 12.

My dad, trying to reinvent our trip, said “Let’s go ride in Spain. I have friends there” but then Spain closed. He has other friends in France, but we heard that the lockdown was coming there as well. I can see now that we were deep in denial; the season was cancelled, yet we just couldn’t admit it.

Given the European cycling destinations – Mallorca, Gerona, Provence, etc. – when shutting down, we knew our only choice was to return home. It was surreal boarding the “last” Delta flight to leave Brussels on March 16th. Normally we would be stoked to have a near-empty plane to ourselves but given the circumstances it just made us feel more alone.

Now I am back in Minnesota, finishing up senior year online and training outside as much as possible. This season might have been cut short, but the fire still burns. I have some unfinished cycling business in Europe and plan to return next year as an Isolé or part of a team. Either way, it is all part of the journey and it is nice to know that within our sport, there has always been love and support for those of us who have to forge our own way.

Before closing, it only seems right to thank Timmy Van Cleempete for making an Isolé feel so welcome and to call out my fellow Junior American Debondt Verdanas teammates who also struck out on a new path. These guys also made the jump and tried racing in Belgium for a season: Jack Brandvold (2020), Conner Bernstein, (2019), and Ellis Nordhougen (2019). These guys proudly raced for Dedondt Verdanas domestically: Gabriel Tonin (2019) and Patrick Welch (2019).