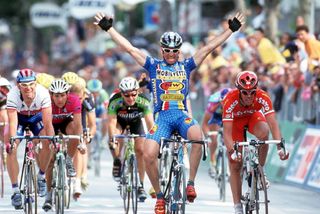 Silvio Martinello began his road career as a sprinter quick enough to win stages at the Giro and the Vuelta a España, but he was also blessed with the self-awareness to repurpose himself as a lead-out man when his Mercatone Uno team signed Mario Cipollini ahead of the 1995 season. The unlikely partnership paid dividends that year, with Martinello guiding the self-styled Lion King to braces of stage wins at the Giro and the Tour de France.

By the spring of 1996, however, with the old Mercatone Uno team rebranded as Saeco, the relationship was fraying. Rather than seek a second opinion during post-stage debriefings, Cipollini tended to prefer listening to an echo of his own views. A hitherto smooth rapport reportedly hit a snag when Martinello questioned his leader’s tactics after a defeat at Driedaagse De Panne, and while they continued to share a room when they travelled to Athens for the start of the 1996 Giro, they were only barely on speaking terms.

Despite his lack of form in the build-up, Cipollini was the favourite to claim the first maglia rosa on a flat opening stage of a Greek excursion that marked the centenary of the Olympic Games. Twenty kilometres from the finish, however, Cipollini approached Martinello to tell him that he didn’t feel well. Ordinarily, Martinello would have talked his leader around. This time out, he took him at his word.

“He did it often, he needed to be geed up a bit. But rather than doing what I used to do before – ‘That happens, come on’ – I told the team to stop riding,” Martinello told Italian journalist Christian Giordano for the Sports Poets Society blog.

Martinello felt himself freed from his lead-out duties, and he duly sprinted to stage victory, beating Fabrizio Guidi and Stefano Zanini to the line to take the first maglia rosa. Cipollini, who lost his lead-out man’s wheel in the run-in, could scarcely hide his dismay afterwards. “Icy,” was how Martinello described the ambience in the room.

By the time the Giro reached Italy, Martinello was rooming alone and competing directly against Cipollini in sprints. After losing the maglia rosa on the last day in Greece, Martinello regained it with second place in Ostuni. First across the line? A reinvigorated Cipollini. “We all thought that he was going to withdraw that day,” Martinello recalled.

Cipollini would go on to land three more stages on that Giro, while Martinello held the maglia ciclamino before leaving the race in the final week. Coexistence with Cipollini had become impossible. The divorce was made public at the Atlanta Olympics, where Martinello won gold on the track in the points race but declined an invitation to ride for Cipollini on the road. “In Athens, problems that already existed became evident,” Martinello said at the time.

He remained at Saeco in 1997 but was handed a separate racing programme to Cipollini. Unable to ride the Giro, he stepped into the commentary booth as an analyst for Mediaset instead. He returned to the role more permanently after his retirement from racing in 2000, this time with RAI, finding a more appreciative audience for his analysis than Cipollini.

A junior world champion on the track, Ivan Quaranta turned professional on the road in 1996, but his early years were non-descript. He failed to notch up a win in two seasons at Polti and spent the 1998 campaign for Slovenian outfit KRKA. His performances there were enough to earn him a ride with Mobilvetta the following year, but even after beating Jeroen Blijlevens to a stage at Driedaagse De Panne, he arrived in Sicily for his Giro debut utterly unfettered by expectation.

As ever in the 1990s, Mario Cipollini was the favourite to claim the first pink jersey of the race as the gruppo left Agrigento’s Valley of the Temples. For most of the day, the Giro’s opening stage followed its preordained script, with the red guard of Saeco dutifully clawing back the day’s early break and teeing up the inevitable bunch sprint in the baroque heart of Modica.

In a chaotic final kilometre, however, Cipollini lost sight of lead-out man Gianni Fagnini and instead parked himself on the wheel of Blijlevens, who had won a stage in each of the previous four editions of the Tour. Neither man looked in undue danger when Quaranta hit the front on the gently curving finishing straight, but the Crema native’s initial acceleration was devastating. He opened a winning gap and though Blijlevens and Cipollini drew closer in the last 30 metres, they had to settle for second and third behind the 24-year-old.

Quaranta had grown up idolising Cipollini and by the time he left the pressroom after the stage, he had more or less written the following day’s headlines. A fast man who delighted in the nickname of il Ghepardo ­– the Cheetah – and who smilingly hammed up his love of the nightclubs? “Cipollini finds his heir,” wrote La Repubblica.

He had certainly met his match, at least in Modica, and although Cipollini would take pink the next day and win four stages in total, Quaranta capped his Giro debut with another win in Cesenatico. A year later, he would again beat Cipollini to the punch on the first road stage, but after racking up six victories in his first three Giro appearances, Quaranta would never scale such heights again. After a low-key campaign at Saeco in 2003, his career petered out and he retired in 2008.

“I did more than 35,000km a year, but I needed a relief valve to give my best,” Quaranta told Tuttobici in 2016. “For me, the discos and the women were an important distraction.” Quaranta is now a directeur sportif at Colpack, while his son Samuel is a promising junior. He evinces no regrets about his own career. “I was a good track rider, a pure sprinter, who had an explosive burst over 200 metres,” he said. “I don’t think many people would have bet that I’d one day win stages of more than 200km at the Giro and even wear the maglia rosa. No regrets, believe me.”

The 2017 Giro boasted a deep field of sprinters but offered them comparatively few opportunities to score stage wins. A mass finish on the opening stage in Sardinia seemed an inevitability. The only question was which of the marquee names would claim the first maglia rosa.

With the day’s break dutifully swept away, Fernando Gaviria, Caleb Ewan, André Greipel, Sam Bennett and Sacha Modolo were all safely in the gruppo as it hurtled towards the finish in Olbia on the Costa Smeralda.

A mass crash with a shade under 3km to go upset the rhythm of an already tense peloton, and the twisting finale made it even more difficult for the sprinters’ teams to gather coherently on the front and set up the finish.

Lukas Pöstlberger was of the few parts of Bennett’s Bora-Hansgrohe train to avoid getting caught behind the crash, and he took his position on the front with a little over a kilometre to go. The Austrian’s turn was so powerful that he inadvertently opened a gap on the Mitchelton-Scott train of Caleb Ewan that was lining up just behind him. Bennett saw the situation unfolding and sense an opportunity developing. He shouted as much into his radio.

“It happened by accident actually,” Pöstlberger said afterwards. “I heard on the radio ‘Pösty, you have a gap, go for it,” so I put everything into it. We wanted to try for a sprint for the final for Sam. Through the city the lead-out trains, I don't know, they lost my wheel or something and I had a gap.”

Pöstlberger swooped smoothly through the bends that followed, while the moment’s hesitation behind proved ruinous for the ambitions of Ewan et al. Come the finishing straight, Pöstlberger had ample time to sit up and savour his most surprising stage win, the first by an Austrian and in what was the 100th edition of the race.

A disappointed Ewan beat Greipel to second place, though both men would have the consolation of winning a stage apiece later in the race. Bennett, for his part, endured a Giro beset by illness and had to wait until 2018 to open his account, when he landed a hat-trick of stage wins.

In Olbia, however, he crossed the line in 10th place with arms aloft at his teammate’s surprise victory. “You only have to look at the slow-mo of the finish to see us all grinning with delight as we crossed the line before mobbing him,” Bennett wrote in the Irish Independent afterwards. “In the melee, I grabbed him by the ears and screamed his name in delight.”