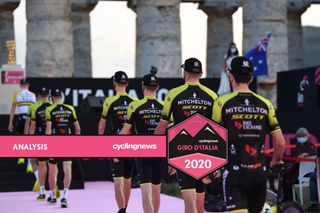 At the Tour de France the Mitchelton-Scott devised their roster around winning stages on almost all terrains. At the Giro d'Italia the game plan has shifted and the Australian WorldTour team will base their tactics around supporting Simon Yates' challenge for the maglia rosa.

The British rider came close in 2018, winning three stages and leading the race before the final few mountain stages but a dramatic collapse saw him drift to eighth on GC. He bounced back to win the Vuelta a EspaĂ±a a few months later before an underwhelming ride in the Giro in 2019. This time, however, he looks to be firing on all cylinders. He won Tirreno-Adriatico in impressive fashion and despite almost 60km of time trial in the Giro, he's primed to attack at every opportunity. He looks more mature than two years ago as well, and has talked about learning from his mistakes but the next few weeks will determine whether he can add a second Grand Tour to his palmares.

Despite the number of time trial kilometres in the race, Yates heads into the Giro dâ€™Italia as one of the main threats on GC. He has the ability to attack on short sharp climbs and the longer summit finishes, while his time trial is on par or if not better than a number of his rivals.

There are relevant questions over his consistency over three weeks given his last two Giro attempts but his Vuelta win from two years ago demonstrates that he knows how to win over three weeks and that he can learn from his mistakes. Quite simply, he looks like a more complete rider than he did two years ago, and with 50 classified climbs and a mountainous back-end to the race the 28-year-old has more than enough terrain to put the time trialists back on the defensive.

The team is solid too, even with Mikel Nieve out, and thereâ€™s no space for stage hunters as the team goes all-in for the pink jersey. Theyâ€™re arguably one of the most complete teams in the entire field.

The Italian has been handed his maiden Grand Tour chance in his home race and with three time trials there are opportunities for him to test himself over the next three weeks. He has an outside chance of top-three finishes in all three tests against the clock but from a development point of view, heâ€™ll be looking to see how his body handles such intense demands during a three-week event.

Heâ€™s off to Jumbo-Visma next year but for the time being heâ€™ll work alongside Cameron Meyer and Michael Hepburn in ensuring that Yates is looked after on the flat roads: but this is mostly about Affini gaining experience, doing his job when required, and seeing how he adapts to such a long and demanding race.

The vastly experienced American was helping Cadel Evans win the Tour de France back in 2011 and even though his days of targeting races on an individual basis are probably behind him, he still has an important part to play in this team.

Heâ€™ll help nurture the younger riders on the team, such as Affini, and perform domestique duties in the medium to high mountains before Jack Haig and Lucas Hamilton take over at the most critical points in the race. Bookwalter is another solid performer who can essentially fulfill several roles in a Grand Tour, and in a race as unpredictable and difficult to control as the Giro dâ€™Italia, thatâ€™s a huge asset.

The 27-year-old is off to pastures new at the end of the season but heâ€™ll line up at the Giro dâ€™Italia to close out his time at Mitchelton-Scott with a ride that helps secure the teamâ€™s first maglia rosa. Haigâ€™s results this year have been impressive, with three top-tens in stage races – including Tirreno-Adriatico  - and a stage win in Ruta del Sol before lockdown struck.

Along with Lucas Hamilton, he will be charged with setting up the race for Yates in the mountains and putting as much pressure on Jumbo Visma, Trek-Segafredo, and Ineos in order try and isolate Yatesâ€™ rivals. The form is there for Haig to play an integral role in Mitchelton-Scottâ€™s success but heâ€™s also potentially riding to establish himself at Bahrain McLaren next year, who arrive at the Giro with only Pello Bilbao capable of riding GC.

If Haig sees himself as a potential leader in longer stage races then a standout ride would be beneficial before he sits down with his new employers during the winter to discuss next year's role. That doesnâ€™t mean he needs to ride for himself at the Giro, but he needs to aim at riding some of Yatesâ€™ rivals off his wheel. If he does his job at the Giro to the best of his ability then next year's plans should take care of themselves.

Hamilton had his first hit as a Grand Tour in last yearâ€™s Giro dâ€™Italia and finished a credible 25th in Verona. The highly-rated 24-year-old has kicked on another level this season with ninth in the Tour Down Under before taking his first WorldTour win with a stage at Tirreno-Adriatico.

His main aim at the Giro will be to support Yatesâ€™ ambitions in the mountains and help soften up the opposition before his leader attempts to gain time but the Australian is also a possible contender for the white jersey if heâ€™s allowed to target the time trials just enough to keep himself in contention before climbing with the front group in the mountains.

Obviously, the white jersey is not a priority at this stage – only Yates in pink matters – but if Hamilton finds himself in contention for the young ridersâ€™ jersey then he might be allowed to fashion some form of challenge. Overall though, his main focus will be on ensuring Mitchelton-Scott has numbers when the road starts to point upwards.

Hepburn is one of the most underrated domestiques in the peloton but in recent years heâ€™s fought his way into Mitchelton-Scottâ€™s Tour de France plans, which demonstrates the respect he holds within the teamâ€™s management. He might be heading to the Giro this year but that doesnâ€™t necessarily mean that heâ€™s been demoted. Certainly not.

Mitchelton-Scott have, unlike a number of team, ensured that they head to Italy with a team that has balanced their Tour-Giro ambitions. Hepburn will link up with Edoardo Affini on the flat stages and keep Yates out of trouble if the weather deteriorates, and if called upon, heâ€™ll control the main peloton if gaps need closing or the team finds themselves commanding the race.

The 28-year-old was a possible candidate for a Tour de France place but abandoning the DauphinĂ© meant that his emphasis was shifted towards the Giro, where he will work in service of a different Yates.

The Mitchelton all-rounder has relatively little Giro experience, with just one outing coming back in 2016, but his proven quality in both the Tour de France, and especially the Vuelta a EspaĂ±a, means that he goes into this race with particular importance resting on his shoulders.

He will be tasked with sharing mountain domestique duties with Jack Haig and Lucas Hamilton and providing support for Yates as and when required.  He took a nice win in the Czech Tour back in August and then followed that up with third overall in the Tour de Hongrie, so the condition is there.

Itâ€™s been an outrageously long time since the Australian road race champion – five years in fact – raced a Grand Tour but with three major stage races in such a short period of time Meyer has been drafted into the Giro team as a domestique for Simon Yates.

The Vuelta was originally on Meyerâ€™s plan but the team were forced into a mini-reshuffle due to Luke Durbridgeâ€™s change of programme but thereâ€™s plenty of experience in Meyerâ€™s locker, while his recent showing at Tirreno Adriatico was solid rather than spectacular.

Meyer also adds depth to the pool of domestiques on the team and will be invaluable if Yates finds himself in an early position of authority. Heâ€™s the designated road captain too and for those nostalgic hearts among you, it was Matt White who first brought Meyer to the Giro to make his Grand Tour debut back in 2009.