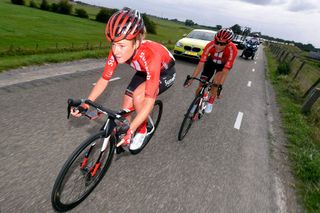 The Team Sunweb women’s UCI program has traced a winding path to their current position near the front of the women’s peloton. The team dates back to 2011 as Skil-Argos before they aligned for the first time with the men’s program’s sponsors in 2013 as Argos-Shimano and again in 2014 as Giant-Shimano. They became Liv-Plantur in 2015 and 2016 as the men raced under the Giant-Alpecin banner and the women promoted Giant’s Liv brand. The women and men aligned again in sponsorship and name in 2017 when Sunweb took over as title sponsor for both teams. In those years the team have grown into one of the best in the women’s peloton, finishing second in both the UCI’s WorldTour and World rankings for 2019.

With only a handful of wins in 2019, the year was a significant step back from the salad days of 2018 when the team brought home 18 wins. Losing Ellen van Dijk and Ruth Winder to the new Trek-Segafredo team was a definite blow, as the duo accounted for nearly a dozen of the 2018 wins and helped to set up their teammates for others. But it was sprinter Coryn River’s step back from 2018 that really put a  dent in the team’s numbers, as she had taken five victories on her own in 2018. Other riders who took wins in 2018 but didn’t deliver in 2019 include Floortje Mackaij and Liane Lippert. The squad also took wins in three team time trials in 2018 but did not seize any wins there in 2019.

Despite the relatively paltry numbers in the win column, Team Sunweb rode exceptionally well in 2019 and was a model of consistency, making the podium at races regularly and racing at the pointy end of affairs when it mattered. The team were second to powerhouse Boels-Dolmans in both the Women’s WorldTour and World rankings based on that consistency.

Leah Kirchmann – The 29-year-old Canadian has been a consistent winner since coming over to Liv-Plantur from American team Optum [now Rally] in 2016, taking six wins in that time and making multiple podiums. Kirchmann's 2019 season was cut short when she was sidelined in September after a crash during the Boels Ladies Tour left her with a torn MCL. Kirchmann had a solid spring campaign in 2019, then followed it with sixth overall at the Women's Tour, second at La Course in July and third overall at the Ladies Tour of Norway. She appeared to be peaking at the right time for the World Championships before her crash and injury. At the team's training camp in December, Kirchmann said she's fully recovered and will be targeting the World Championships and the Olympic Games in 2020.

Coryn Rivera – Another consistent winner since joining Team Sunweb in 2017 from UnitedHealthcare, the 27-year-old American sprinter has taken 11 wins in that time. She came up with just two wins in 2019 after increasing her focus to stage racing, but the diminutive dynamo graced multiple podiums and regularly featured in the top 10. Her top 10 finish on the difficult Worlds course in Yorkshire shows she is more than just a fast finisher, however. Rivera is sure to be contending for many wins again in 2020, with a return to the podium's top step on a more frequent basis very likely.

Floortje Mackaij – The talented 24-year-old Dutch rider who won Gent Wevelgem in 2015 was second last year in Liege-Bastogne-Liege and continues to threaten to be a breakthrough rider in the Spring Classics, where she excels. She featured regularly in the top 10 of the biggest spring races and will be a valuable card for the team to play along with Rivera, Kirchmann and 19-year-old Franziska Koch. Sunweb have signed her through 2022, reflecting the confidence they have in her development.

Alison Jackson – The 31-year-old Canadian will bring significant firepower to Team Siuweb after racing with American team Tibco-SVB for the past two seasons. Before that, Jackson raced with the Twenty16 teams and Italian squad Bepink Cogeas.  Jackson continues to develop as an international rider, finishing second overall at he Women's WorldTour one-day race Tour of Guangxi. She also won a stage at the Tour of Scotland and finished second overall there as well as finishing fifth overall at the early season Tour Down Under. Jackson should fit in well alongside fellow Canadian Kirchmann and American Rivera, so expect her climb through the women's peloton to continue.

Team Sunweb excel in the one-day races, especially the Spring Classics, where the combination of Kirchmann, Rivera and Mackaij give them multiple weapons to deploy in different parts of the race. They were knocking on the door of Classics victory repeatedly in 2019, and there is no reason to believe they won't be able to kick open that door in 2020, especially with the addition of Jackson. They are also the model of consistency, as one would expect with a team that claimed only a handful of victories in 2019 and yet placed second in the Women's WorldTour. The trick now is to turn that consistency into wins.

The team needs to tweak their game just enough to turn all of their strong, consistent riding into notches in the win column. Wins in the Spring Classics appear to be well within reach for 2020, but their prowess in stage racing is still in question. The addition of Jackson should help, but the team seems to lack a pure climber to compete with the very best in the high mountains where many big stage races are won. With Jackson the only rider on the roster over 30, the team is relatively young, which is a weakness now but can turn into a strength down the road.

Look for Team Sunweb to add significantly to their win count in 2020. The core of the team from 2018 is nearly intact, and the addition of Jackson should be a big plus on the road. Kirchmann and Rivera are now wily veterans in the European women's peloton, and they should provide plenty of guidance and mentorship for their young teammates. The team have a history of finding talented young riders and developing them, and this bodes well for their future.