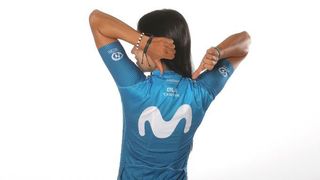 Movistar Telefonica launched a UCI women’s team at the start of the 2018 season, alongside its men’s WorldTour team counterpart, recognising the importance of fostering inclusion and gender equality.

Although the initial intent was to help develop Spanish athletes and women’s cycling in Spain, they have quickly become one of the highest-ranked squads in the world. In fact, as women’s professional cycling embarks on a series of structural changes in 2020, Movistar Team Women will be among the eight first-ever WorldTour teams.

Movistar Team Women had only three victories last year and it’s no surprise that with their focus on the Spanish calendar, all three wins happened in Spain. Lourdes Oyarbide won the road race and Sheyla Gutierrez won the individual time trial at the Spanish National Championships, showing the team’s dominance on home soil. Oyarbide also won a stage at the Vuelta a Burgos Feminas.

On the world-class stage, the team were among the top 10 in 15 races ranging from Spring Classics like Omloop Het Nieuwsblad and Dwars door Vlaanderen to stage races like the Tour de Yorkshire, Emakumeen Bira, Lotto Thüringen Ladies Tour and OVO Energy Women’s Tour. They closed out the season with strong performances in Spain at the Emakumeen Nafarroako Klasikoa, Clasica Femenina Navarra and Domostia San Sebastian Klasikoa.

Lourdes Oyarbide: The Spanish road race champion was one of the standout performers of the 2019 season, and at just 25 years old, she will likely continue to develop into one of the team’s top performers on the WorldTour. She has already proven her strength after placing third overall at the International Lotto Thüringen Ladies Tour and winning a stage at the Vuelta a Burgos Feminas.

Sheyla Gutierrez: The Spanish time trial champion, who re-upped her contract at the same time as Oyarbide, has been one of Spain’s top performers among the professional women’s peloton for the past five years. She has progressed each season with victories at GP de Plumelec-Morbihan Dames (2015), Le Samyn des Dames and a stage of the Giro Rosa (2017), and overall victories at Tour of Zhoushan Island and Panorama Guizhou (2018).

Eider Merino: A former national road race champion, Merino is a strong climber and is showing more and more potential with each year of racing at the WorldTour level. Last year, she was third overall at the Tour de l’Ardeche, finished among the front group in mountain stages of the Giro Rosa, ninth overall at Emakumeen Bira and fourth overall at Setmena Ciclista Valenciana. She re-signed for 2020 along with several others.

Jelena Eric: New to the team in 2020, Eric joins Movistar Team Women from the Italian-based Ale Cipollini. She was brought in to improve on the team’s ability to finish well in the flatter finals. Eric is a five-time national champion from Serbia, and over the course of her five years in the professional ranks, she has stood on the podium at  Grand Prix Dottignies, Vuelta a Burgos, Vuelta Costa Rica and last year won a stage of the BeNe Ladies Tour.

Movistar Team Women have a cohesive core of Spanish riders who have developed with the programme from the beginning. Together these riders have made their mark on world-class racing by consistently placing among the top 10. When opportunities have presented themselves, the riders have been capable of bringing the team to the podium. On home soil, there is no other team that rivals Movistar Team Women.

The team lacks a rider who they can rally around to support to victory. They have strong riders for all terrain – climbing, sprints and Classics – but no one capable of contesting the finals in any of these areas. The team performs excellently in Spain and at events that are a step below the WorldTour, but they need to take the next step up when it comes to racing internationally and at the world-class level.

Movistar Team Women have the backing of a internationally renowned title sponsor in Movistar Telefonica, that has an expressed interest in equality and inclusion. They also have the support of a management team that has run a men’s WorldTour programme for the past 40 years.

The UCI has granted the women’s team a four-year WorldTour licence because it has shown that it can meet the heightened financial, ethical and professional requirements that go along with being among the top-tier of teams. The team lost some of their top performers last year, such as Mavi Garcia, Roxane Fournier and Malgorzata Jasinska, but with several new signings in 2020, and a more international roster, Movistar Team Women have a real shot at contesting for victories on the Women’s WorldTour.