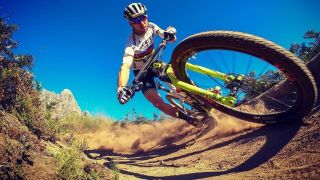 The 2020 Cape Epic remains true to its hors categorie classification, with a route covering 402 miles over eight days.

As with all previous editions of this race, distance is not the issue. Beautiful but brutal African terrain and climbing gradients are what makes the Cape Epic so notorious, and for 2020, the field will total no less than 15,550m of ascent during the week’s racing.

In an Olympic year, the Cape Epic is always a gamble for professional riders. Some consider it an excellent endurance training opportunity, whilst others wish to avoid the potential injury risk of a week’s wild riding in harshly unpredictable African conditions.

Coronavirus: Cape Epic to go ahead as scheduled

Nino Schurter is unquestionably the men’s favourite for 2020, as defending champion. The Swiss is considered a rider without rival in both short and long format mountain bike racing. He also has deep familiarisation with South African terrain, as Schurter spends a portion of each Northern Hemisphere winter training in Stellenbosch.

Although the Cape Epic is primarily an endurance event, there are issues beyond the obvious which separate winners from runners-up. There is simply no adequate preparation for the heat and dust, which many professional riders can find stifling, other than spending weeks in Africa, training at the peak of the Southern Hemisphere summer.

Schurter’s experience with South African summertime riding gives him an excellent advantage of compounded acclimatisation. His incredible technical descending ability allows for the harvesting of precious seconds on those long downhill runs, where rivals of lesser skill must employ caution to avoid crashing on the shale-strewn African trails.

The Cape Epic remains a team event and Schurter’s only weakness would be the ability of his Team Scott Sram partner to not implode. Schurter’s teammate for 2020 is fellow Swiss, Lars Forster, who did a credible job of hanging onto the multiple World Champion's wheel for an overall win last year.

Fumic is a great high-speed descender, in the same mould as Schurter, and Avancini has terrific warm weather riding ability, hailing from Brazil. If Team Scott Sram suffers an early mechanical, and the Cape Epic is often a race decided by punctures, the Cannondale Factory Racing team could challenge for a win.

By far the most experienced professional rider at the 2020 event is five-time champion, Karl Platt. The German is teamed with Austria’s Alban Lakata. Together they are a formidable combination, capable of powering away on the flat gravel road sections which link those brutally steep fynbos climbs the Cape Epic is famous for.

Platt and Lakata are larger in stature than most of their rivals and although those extra kilograms must be hauled up climbs, they also possess huge level road power-cadence ability. This could see them lead and sustain potential breakaways on the barren farm roads which feature on most of the Cape Epic route.

Lakata has been a victim to the cruel unpredictability of this event. In 2015 he collided with the smallest of Western Cape antelopes, a Duiker, breaking a shoulder and ending his Cape Epic campaign that year.

Who are the potential outliers at this year’s Cape Epic? Adventurous road pros have increasingly been drawn to the event and EF Racing’s duo of Lachlan Morton and Alex Howes are trying their debut luck this year. New to the entire experience and blessed with the adventurism of youth, this young duo could surprise some of the seasoned mountain bikers competing.

Denmark’s Annika Langvad has five Cape Epic victories to her name, from five starts. Her teammate, Sweden’s Jenny Rissveds, is an Olympic gold medallist. Rissveds might only have ridden the Cape Epic once before, but she did manage to tally a win in the mixed category from that single attempt.

The Cape Epic remains a wildly intense race, with soaking African heat. Weather predictions are for temperatures in the high 80s on the Fahrenheit scale.

Some late summer rain should calm the dust factor, but the Witzenberg mountain range, where some of 2020 route’s most challenging climbs will ascend, is known for its testing radiation profile.