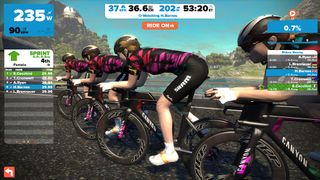 Zwift has announced the 2019 finalists of its Zwift Academy, with six finalists competing to be among the two riders who will sign with Canyon-SRAM and the NTT Pro Cycling U23 team.

From the operating theatre to the pro peloton, Tanja Erath thrives with Canyon-SRAM

Leah Thorvilson: I remember feeling like an outsider and an underdog

The field has been narrowed down from 68,000 riders to just six through a series of workouts, tests and training sessions held over several months. The finalists will take part in each team's training camps in Spain in early December, with riders performing a final set of challenges before a winner is picked.

Tests will include virtual Zwift sessions, as well as riding on the road with their prospective new teammates. Riders will be assessed on their raw talent as well as their race craft, communication skills and teamwork. Coaches, staff and riders at Canyon and NTT U23 will select the two winners.

The three Canyon-SRAM finalists include a pair of 22-year-olds in Catherine Colyn, U23 South African road race champion in 2018, and Australian Jessica Pratt, who raced the Tour Down Under and Herald Sun Tour this year. Twenty–nine-year-old Samara Sheppard of New Zealand, who raced for Bizkaia-Durango in 2015, rounds out the women's trio.

Two New Zealanders have made the cut to be in the running for the NTT Pro Cycling U23 squad, with 18-year-old Drew Christensen, who competed in the junior road race at the UCI Road World Championships this year, and 20-year-old cyclo-crosser Campbell Pithie both making it to the final. Dutch 19-year-old Mathijs Loman is the third men's finalist.

One winner will be selected from each trio, with the riders joining previous winners Leah Thorvilson, Tanja Erath and Ella Harris at Canyon-SRAM, while the men's winner will race alongside 2018 winner Martin Lavrič at NTT U23.