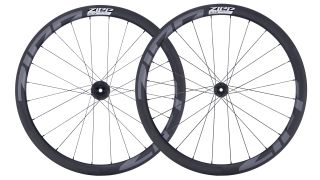 Zipp’s new Firecrest 303 wheel isn’t just an evolution of existing priorities, it’s a whole step-change in how the Indianapolis-based company is looking at how to make every type of rider faster. If you follow Zipp's radical tyre pressure advice, the new tech also adds comfort, survivability and all-surface efficiency.

Zipp has always been at the cutting edge of aero gains, even when that cutting edge actually became broader and blunter, and it has fully embraced the fatter and faster trend with the new Firecrest 303.

While external width is only 1mm wider at 30mm, the rims use a hookless sidewall design that gives a 25mm bed and a much fuller tyre profile. This reduces the ‘waist’ between tyre and rim that could often trip up airflow and while the new wheel is 5mm shallower than the old 303 at 40mm deep, it’s actually tested faster in the wind tunnel and on the road.

The big admission from Zipp for this launch was that it has always given aero the focus over weight. Not anymore. As well as taking a new logo first introduced on its new 3Zero Moto MTB wheels, Zipp has also taken a lot of construction and lay up cues (it's not leaking details) from the deliberately flexible and shock-shrugging MTB wheels. 380g rims bring the complete weight down to a viciously competitive 1355g, saving a massive 300g compared to the previous Firecrest. They’re also considerably lighter on your finances at £1,600 ($1,900 / €1,800) for a pair.

Despite being lighter, the shock-absorbing, vertical flex capacity learned from the MTB development work also makes the new 303 much more impact-resistant. Although we haven’t tried the wheels yet, the video clips from the presentation certainly looked impressive and Zipp is claiming 28% more impact resistance than top-end competitors that are also heavier. The wider, tubeless rim bed - that’s designed to be used with tyres up to 50mm - also gives a broader, more supported, innertube-free tyre that’s less likely to be damaged by rocks/potholes/kerbs etc. The wheels are also covered by a lifetime warranty against impact or other damage caused while riding.

While superlight, aero road / gravel wheels that are broader than most XC MTB wheels is a bandwagon that’s already rolling, Zipp has really gone out in front and started pulling the horses with its tyre pressure recommendations. Real and laboratory rolling road testing with different tyre pressures threw up very interesting data about the effects of tyre sag, vertical tyre movement and contact patch shape. The take-home is that using Zipp’s own 28mm tubeless road tyres showed that on rough/gravel/cobbled roads, a 70kg rider will roll fastest with 55psi in the front and 60psi in the rear. Using a 30mm you should drop to 50-55psi and even lower the fatter you go. Even on smoother roads, Zipp’s data suggests you only need a handful more psi to return a 10W gain over narrower rims and tyres at higher pressures. They’ve even deliberately rated the rims with a max of 72psi, not because more isn’t safer but because they’re determined to get people to try lower pressures.

They also point to the fact that lower pressures in larger tyres that absorb and flow over impacts and rough sections rather than kicking the bike upwards, dramatically reduce rider fatigue and make keeping a smooth cadence a lot easier. Obviously there’s nothing new in this push towards lower pressures and cyclo-cross riders have been running around on minimal bar for decades, but it’s the first time a big manufacturer has really pushed the point. To keep tabs on your exact pressures Zipp also provides a faired version of the TyreWiz pressure monitoring, Bluetooth connected valves. These also communicate with the new AXS Web ride app for a complete picture of pressure change as you go higher, hotter (or vice versa) on your rides.

It’s worth pointing out that the new 303 wheels are only compatible with 28mm or wider tyres and only with tyres rated safe for hookless rims (which unfortunately doesn’t include Continental at the moment).

The new wheels also get improved hubs. New ZR1 DB hubs were developed in Germany but actioned feedback from UK shops who were having reliability and sealing issues with previous Zipp wheels. A new freehub gives 66-point engagement for near-instant pick-up and a ‘great new noise’. They use the same bigger bearings as the durable Cognition hubs of their top Zipp wheels and they’re better sealed, too. Centerlock disc versions now have the lockring included and when you do need to service them it’s a simple, tool-free, pull apart job. All Zipp wheels - including the Super 9 Disc are tubeless now, too.

Given that they’re claimed to be faster, lighter, tougher, smoother, better mechanically and covered with a great warranty at a much lower price, the new Firecrest sound like a killer package for a wide range of riders. We’ll be putting serious road and gravel miles into a test set as soon as they arrive, so make sure you stay tuned for a full test further down the Zipp line.