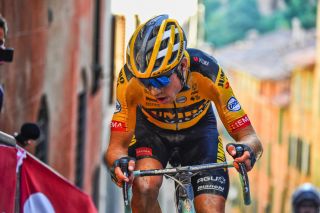 Wout van Aert aims to secure a first Monument victory of his career at Milan-San Remo on Saturday, and with an impressive solo win in Strade Bianche last week, he certainly has the form to meet that goal. On the eve of the race, the Jumbo-Visma rider said he has several cards to play, including the possibility of a late-race attack on the Poggio, but he is also confident in his sprint and has a strong team to back him up.

"It would be a dream week to win a Monument," said Van Aert. "Of course, it's a step up that I want to take, and with the legs that I have now, I need to believe in it. I need to give it a go because that's what we're here for with a strong team."

Race organisers RCS Sport announced Friday that they modified the route because of heavy thunderstorms that struck Alessandria. The new deviation means that the race now extended to 305km. Organisers were already forced to make changes to this year's route, with a new inland course, after mayors of a dozen Ligurian coastal towns refused to close down their roads during the peak of the tourism season.

The route will now avoid the mid-race Passo Turchino and the Capi climbs, and will descend to the coast much later in the race. It will follow the same final 40km that includes the Cipressa and Poggio climbs before descending into San Remo. Van Aert said that an attack on the Poggio could provide him with the first opportunity to win the race.

"Milan-San Remo is a really special race and a really hard race because of the distance, and normally I should be able to handle the climbs a bit easier than the fastest sprinters in the world, and this will help me, or suit me better, in the final sprint," Van Aert said.

"On the other hand, I have other cards I can play. Last year, we saw that an attack on the Poggio is still something that works, and we went away with a small group, which could be a good opportunity for me. It's always good that I have more options than one."

Van Aert's revised season is off to an excellent start with a victory at Strade Bianche last Saturday, where he proved strongest of a select lead group on the gravel roads and steep climbs through Tuscany.

Van Aert said that he didn't think that Démare or Ewan was faster than him, but that he had a botched final due to a crash in the closing kilometres that left him with only one lead-out man.

"I don't think they were faster," Van Aert recalled the sprint in Turin. "I wasn't in the best position coming into the final corner, but I had great lead-out riders with Amund [Grondahl] and Timo [Roosen], but Amund got stuck in the crash, behind it, and that's why Timo was too early in the wind. When I launched my sprint I was further away from Démare than when I finished it, so I think it was good to see that, and it gives me confidence that I don't have to fear other riders when we come to a sprint this Saturday."

Last year, Van Aert was part of a decisive move that cleared the field over the Poggio. Led by eventual winner Julian Alaphilippe, the lead group also included Matteo Trentin, Peter Sagan, and Alejandro Valverde, and then swelled as riders bridged across to it. Van Aert finished sixth from the small group sprint.

He said that the most important thing he's learned between last year's Milan-San Remo and this year's edition on Saturday is believing that he can sprint among the best riders in the world.

"The most important learning point regarding last year is my sprint," Van Aert said. "Last year, it was already quite good, but I didn't believe in my sprint as a necessary move in the final kilometres. I thought I had to attack to be able to win. I know now, because of other performances in the sprint, that I can be more confident and wait for a sprint."