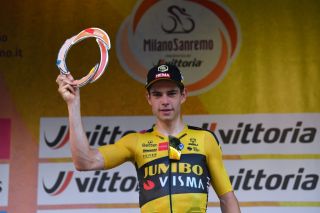 Despite the emotional aftermath of winning Milan-San Remo and celebrating with his family and partner, Wout van Aert still found time to reflect on the terrible crash at the Tour de Pologne and offer some kind words of support for both Fabio Jakobsen and Dylan Groenewegen.

Jakobsen came out of a medically induced coma on Friday and faces a long and difficult recovery from multiple fractures to his face and damage to his trachea.

Van Aert's teammate Groenewegen was instantly accused of sparking the high-speed crash, and gave an emotional interview with Dutch broadcaster NOS on Friday, saying he was sorry for what he did. He has been suspended by his team pending the outcome of a UCI investigation.

Van Aert was clearly irritated by the polemics and finger pointing that exploded on social media after the crash, even when Jakobsen was still receiving emergency treatment in the Polish hospital.

Trentin: Everybody is to blame for Jakobsen crash

"We weren't in that race and so it's unnecessary and difficult to judge what happened there," he said when asked for his opinion post-race and if it had affected his build-up for Milan-San Remo.

"We all know Dylan personally and we felt bad for him. We know he's a good guy and didn't do it on purpose. He made a big mistake but it was painful for us to see the reactions.

"Especially in the beginning, we were worried about Fabio and I was quite surprised that the general focus was not on that. He was in life danger and so everything else had to wait, in my opinion. It was strange to see talk about who was guilty and stuff like that. We were more following the news about Fabio because he's part of the peloton and the cycling family."

Van Aert has worked with a sports psychologist to help overcome the trauma of his own crash at last year's Tour de France, when a protruding barrier hook cut deep into his upper thigh and hip during the Pau time trial.

He is aware of the risks professional riders take on a near daily basis but is able to put them aside and focus on his racing.

"We all know this job has a lot of risks and that we could crash like that one day," Van Aert said.

"We were really relieved there was a bit of positive news [about Jakobsen] and that his situation was evolving in a good way.

"There was a big race coming up and we were in a winning mood, so we tried to focus on that. It's hard to say that but that's how life is and it’s also our job. When we have a number on our backs, we know we have to take risks and go for it. That's what we did."