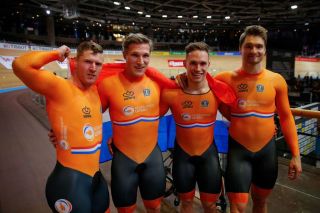 Two world records were broken during the opening day of the UCI Track World Championships in Berlin on Wednesday, with the Danish squad smashing the men's team pursuit world record set by Australia and the Dutch men's team sprint squad shattering the record set in 2013 by Germany at altitude in Aguascalientes.

Denmark made the first splash in the qualifying round of the men's team pursuit when Lasse Norman Hansen, Julius Johansen, Frederik Rodenberg Madsen and Rasmus Pedersen slashed 1.433 seconds off the 3:48.012 mark set by Australia's Sam Welsford, Kelland O'Brien, Leigh Howard and Alex Porter in last year's world championships and then went even quicker in the next round to set a new world record at 3:46.203.

After finishing fourth fastest in the qualifying, Italy were up against the new world record holders in Round 1 to advance to the finals. Knowing that the other bronze medal qualifiers Australia had set a 3:48.625, Italy rallied in the final kilometre to close the gap to Denmark - finishing in a time that also beat Australia's former world record: 3:46.513.

Great Britain faltered in the opening day of the championships, with Ed Clancey, Ethan Hayter, Charlie Tanfield and Oliver Wood only able to qualify seventh fastest. They had a chance to make the bronze medal final, but did not make the top four fastest times in Round 1.

The second world record fell in the men's team sprint, with the Netherlands trio of Jeffrey Hoogerland, Harrie Lavreysen and Roy van den Berg beating the 41.871 set by Germany in 2013 by more than half a second, stopping the clock at a blistering 41.275 in Round 1 to qualify for the gold medal final against Great Britain.

Britan's Jack Carlin, Ryan Owens and Jason Kenny were over one second slower in the round with a 42.294 and stood little chance against the Dutch in the gold medal final, when the trio in orange scorched the track with another world record-setting performance, going 0.05 seconds quicker than their previous mark to set the bar at 41.225.

The Dutch success added to the world title won by Kirsten Wild in the women's scratch race.

It might not have been a world record in the women's team sprint, but the home crowd treated their winning team of Pauline Sophie Grabosch and Emma Hinze as if they had: the Germans won the world title for the first time since former champion Kristina Vogel's accident in 2018 that left the sprinter paralyzed.

Grabosch and Hinze beat defending champions Stephanie Morton and Kaarle McCulloch in the gold medal final to take the home country's first world title of the match. China defeated Russia for the bronze.