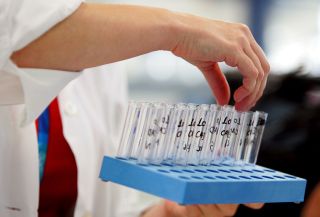 The World Anti-Doping Agency's independent Compliance Review Committee (CRC) has recommended a four-year ban on Russia after the country failed to comply with the requirements WADA had set for Russia to hand over all of the laboratory data from the Moscow laboratory.

The WADA Executive Committee is due to discuss the recommendation on December 9 at its meeting in Paris.

Independent forensic experts found inconsistencies in the data that was retrieved from the Moscow Laboratory in January 2019. A complete transfer of the data was one of the pre-conditions for Russia to remain reinstated after its 2015 state-sponsored doping scandal.

Cookson has confidence in Russian cycling despite athletics doping scandal

WADA said the Moscow data "are neither complete nor fully authentic", and when compared with a 2015 copy provided by a whistleblower, the 2019 copy of the laboratory data "hundreds of presumptive adverse analytical findings that appear in the 2015 copy of the LIMS database have been removed from the 2019 copy, and the related underlying raw data and PDF files have been deleted or altered."

WADA added that the data included "planted fabricated evidence" that made it seem as if whistleblower Dr. Grigory Rodchenkov and two co-conspirators falsified entries "in a scheme to extort money from athletes" and deleted evidence proving that another staff member was involved in covering up doping by Russian athletes in 2014 and 2015.

The doping scandal already saw parts of the Russian team barred from the 2016 Summer Olympic Games in Rio de Janeiro, Brazil, and could jeopardize the team's participation in the Tokyo Olympic Games next year.

According to the New York Times, the WADA Executive Committee is expected to support the ban which could then be contested at the Court of Arbitration for Sport. It would allow individual international federations to clear some athletes to participate as independent athletes.

The country could face further sanctions including being barred from all international competitions for all WADA signatories including the UCI. It is unclear from the report if athletes would be allowed to compete under as independents in non-Olympic events, such as the UCI World Championships or World Cups where riders compete with national teams.

The recommendation also calls for Russia to be banned from hosting or bidding on hosting sporting events for four years, and prevents Russian Government officials/representatives from sitting as "members of the boards or committees or any other bodies of any Code Signatory (or its members) or association of Signatories".

Russian athletes can only compete in major events if they can prove they are not implicated in the doping scheme either by being mentioned in the original independent report by Richard McLaren, they have no positive doping tests in the laboratory data or have not had their sample data manipulated.

In 2016, track cyclists Dmitry Sokolov, Kirill Sveshnikov and Dmitry Strakhov were barred from competing in Rio and attempted to sue McLaren and WADA for being "unfairly tarnished as cheaters and dopers".