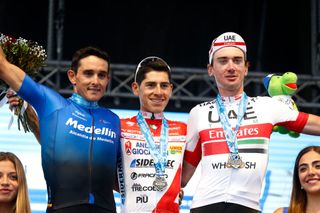 In a bike race, information can be hard to process, especially when the speed is touching 50kph and the times gaps are crackling in your earpiece in several different languages. As the Vuelta a San Juan split into echelons in the final 40km of stage 5, Brandon McNulty was only vaguely aware that race leader Remco Evenepoel was more than a minute behind a front group being driven by his UAE Team Emirates squad, but he knew what the situation required.

"I wasn’t super aware of the gap. The radio was mostly Italian, so I left it to guys like [Fernando] Gaviria and [Max] Richeze to tell me what to do," McNulty told Cyclingnews after he had placed third at the summit of the Alto Colorado, moving up to fourth place overall in the process.

"We were definitely aware of the likelihood of the race splitting in the crosswinds, so we were pretty attentive. When it happened, the guys were super solid in putting us in a good position and then driving it. I think it played out well for us because it put some of the favourites in difficulty."

McNulty is in his first race with UAE Team Emirates, having joined from Rally in the off-season, but he has been handed the reins of leadership in Argentina, with Gaviria and Richeze particularly prominent in their efforts on his behalf on Friday.

When Evenepoel and Oscar Sevilla (Team Medellin) were caught on the wrong side of the split, a coalition of riders from UAE Team Emirates and Bora-Hansgrohe combined to force a sizeable gap. On the long and shallow rise towards the Alto Colorado, McNulty moved onto the virtual podium, and a shot at overall victory briefly reared into view.

In the final 20km, however, Evenepoel produced yet another feat of disarming strength. Now bereft of teammates, the white jersey was the prime force in closing a gap that at one point had yawned out to 1:18. He was on the cusp of making the junction when the Alto Colorado began with 14km or so remaining, and McNulty thought it best to get his retaliation in first. Wearing the green jersey of best young rider (on loan from the overall leader Evenepoel), McNulty clipped away from the front group in the company of Juan Javier Melivilo (Pocito).

"I don’t really know how that first move went," McNulty said. "Guys were just looking at each other and I went up the side and accelerated a bit. I wasn’t going full or anything, but it was good to be ahead while the others were coming back up."

The American went on the offensive once again with 10km remaining, this time in the company of a lively Guillaume Martin (Cofidis), but when Evenepoel restored some sort of order 1500 metres later, it was clear that his hold on the overall lead was no longer in doubt. McNulty's focus switched to trying to claim stage victory. "Once we hit 5k to go mark, I knew I wasn’t going to put a minute into Remco and Sevilla," he said.

After several speculative efforts petered out in the closing kilometres, Miguel Florez (Androni-Sidermec) managed to rip clear of the front group with a little over 500 metres to go to claim stage victory. McNulty mustered a better response than most but had to settle for third on the stage, just behind Sevilla.

"I think the altitude probably goofs with your punch," McNulty said. "It’s January, too. I’ve got a good ‘long’ engine, but my sprint isn’t really there for that kind of effort. But I think third was good. I don’t have the explosiveness yet, but that will come."

McNulty’s efforts moved him up to 4th overall, 1:21 down on Evenepoel and just 20 seconds off Sevilla’s third place.

The 21-year-old was among the later starters in Tuesday’s time trial to Punta Negra, thus facing a stiffer headwind in the finale than the men ahead of him in the overall standings. Had he ridden in more clement conditions, McNulty might well have placed a deposit on a podium finish – or more – though he downplayed the idea.

"I’m not going to sit here and say I lost because of the wind because I don’t know how it was for the earlier guys," McNulty said. "But it was really windy when I went."