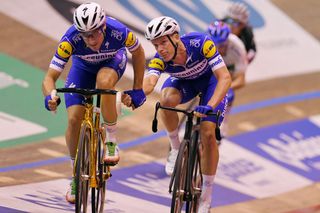 Elia Viviani racing on the track. In 2020 he will combine road and track ambitions (Image credit: Getty Images)

Elia Viviani has laid out his main objectives for 2020, with the Spring Classics, Tour de France and the defence of his Omnium title at the Olympic Games his primary targets.

Viviani leaves Deceunink-QuickStep at the end of the current campaign after sealing a switch to Cofidis for 2020. He will take on a major leadership role at the French team after Nacer Bouhanni failed to live up to expectations, with the Italian hoping to maintain the high levels of success he has experienced in the past few years.

This year Viviani, 30, won his maiden Tour de France stage in Nancy before enjoying a hugely successsful August that included wins in Hamburg, RideLondon and The European Chamionships. Although he failed to win a stage in the Giro d’Italia, the former Team Sky rider still picked up victories at the Tour Down Under, UAE Tour, Tirreno-Adriatico and the Cadel Evans Great Ocean Road Race.

Viviani back in the saddle and preparing for 2020 with Cofidis

He also combined a busy road season with his obligations and race programme on the track, and those directives will once again help form his plans for next season.

He will aim for victory in Milan-San Remo in March, although his only top-10 performance there came in 2017.

"My first goal is Milan-San Remo and the other spring classics, I have to redeem myself. There will be no Giro d’Italia for me, but the Tour, to prepare well and be 100 percent at the Tokyo Olympics, a fixation in my head,” he said according to La Nazione.