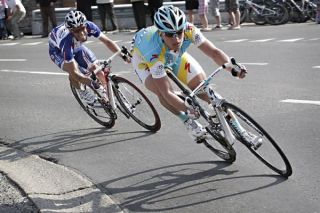 A Belgian court has cleared Alexander Vinokourov and Alexander Kolobnev of fraud, with the judge ruling there was a lack of concrete evidence to show that the Astana team manager bought off the former Russian rider to win the 2010 edition of Liège-Bastogne-Liège.

Belgian prosecutors had called for both former riders to be fined and jailed for six months, and the alleged bribe of €150,000 confiscated from Kolobnev's bank account. Both riders denied the accusations and their lawyers fought for their acquittal.

The two led the hilly one-day in the final and then worked together to hold off the pursuit by Philippe Gilbert, Alejandro Valverde and then-world champion Cadel Evans. Vinokourov attacked in the final kilometre and dropped Kolobnev on the uphill finish.

The allegations that Vinokourov bought off his rival to win the Ardennes Classic were first made in 2011 when Swiss magazine L'Illustré reported that Kolobnev had been paid by Vinokourov, and published email exchanges between the two riders after the race.

Vinokourov later claimed that the emails could have been hacked.

“Here is a copy of all my bank information and clear it from your mail box, or my balls may be cut off,” Kolobnev reportedly said in an email.

Vinokourov replied, saying, "You have done everything properly, do not worry. As you say, the Earth is round and God sees everything ... So, again thank you. You, this year you will win the championship finally, I believe. Do not worry about the agreement, I will do it."

L'Illustré showed the email exchange to Vinokourov during an Astana training camp.

"No, there was no cheating at Liège-Bastogne-Liège. In my career, I've never done that, I have always fought to win."

He did admit to speaking with Kolobnev during the race, "but in a breakaway, it's normal, it is not forbidden, is it?"

Kolobnev retired from the sport at the end of the 2016 season, while Vinokourov retired immediately after the 2012 Clásica San Sebastián, having won the Olympic road race in London two weeks earlier.

Vinokourov was banned after testing positive for blood doping at the 2007 Tour de France, but resumed his career in 2009 after initially saying he'd retire, and went on to win a stage at the 2010 Tour, as well as Liège-Bastogne-Liège and the 2012 London Olympic road race.

According to initial reports in Belgian media, the judged acquitted Vinokourov and Kolobnev because of three key elements: it was impossible to prove that any kind of corruption took place during the race, the email exchange could have been fake and the defence lawyers proved that a €100,000 payment had been for a property investment.

Vinokourov claimed the final payment of €50,000 was to pay back Kolobnev for a loan the Russian had made while Vinokourov was banned for doping.

"It's my private life," Vinokourov said  during the investigation. "It's another story to blacken my name. I often loan money left and right."