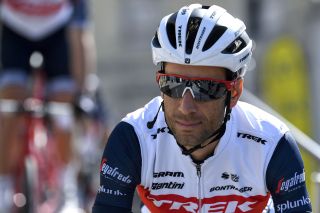 A May unlike any other for Vincenzo Nibali (Trek-Segafredo). The Sicilian has raced the Giro d’Italia on eight occasions since he made his debut in 2007, winning the race twice and finishing on the podium six times in total.

In the years when Nibali skipped the Giro, the month of May was spent cloistered in training camps, preparing methodically for the Tour de France in the morning and watching the Corsa Rosa on television in the afternoon.

The 2020 Giro was due to get underway in Budpaest on Saturday, but the race was postponed in March due to the COVID-19 coronavirus pandemic and has since been tentatively rescheduled for October 3-25. The Giro’s absence from its usual early summer date, Nibali told La Gazzetta dello Sport, has been “strange.”

Nibali: My social media accounts were verified by being thrown out of the Vuelta a España

“I miss the Giro so much,” Nibali said. “These should have been the days of tension, doubt, adrenaline and fear, but also of awareness. You’re concentrated and attentive to every detail, asking yourself ‘Have I prepared well?’ Now, instead, I’m calm, and you can even allow yourself the odd lapse. For the last 15 years, May has been the height of the season for me.”

The coronavirus pandemic brought professional cycling to a halt at Paris-Nice in March, but the UCI this week unveiled a revised calendar of Autumn racing in the event that COVID-19 restrictions in Europe are lifted sufficiently to allow competition to resume. In the best-case scenario, the season would resume with Strade Bianche on August 1 and the Tour de France would take place from August 29-September 20, but Nibali admitted that he is not yet in a frame of mind to resume structured training.

“I don’t want to have an obligatory programme in mind yet,” Nibali said. “Afterwards, we’ll change the ‘chip’ and I’ll get myself back in race mode. Obviously, I’m being professional even now, but in a calmer way. This is a moment that none of us had ever lived in May.”

Nibali was originally due to ride the Giro, Olympic Games, Vuelta a España and World Championships in 2020, but he has yet to decide on his race schedule on the revised, three-month calendar.

“The Giro d’Italia is still in my head, but there isn’t certainty yet. I’ll speak about it with my team and we’ll decide everything,” said Nibali, who expressed disappointment that the Giro clashes with both Monument Classics and the opening phase of the Vuelta.

“We knew it would be very compressed and hard to do better. Certainly, when I saw Liège-Bastogne-Liège clashing with the Giro, I wasn’t at all happy! I want to think it’s a draft, in the sense that they could still make some modifications.”

In the wide-ranging interview with La Gazzetta, Nibali also revisited his past Giri and confessed that he had struggled in 2015 and 2016 with the demands of being a Tour de France winner. The turning point came when he won the 2016 Giro with two long-range attacks on the final two days in the mountains, having struggled through the race to that point.

“The Tour completely overwhelmed me, it even changed my approach to the media,” Nibali said. “I was always very available but after that, I stepped back a bit. I was always nervous, I struggled with it. At every race, I thought about what was going to be written, what wasn’t going to be written… It even affected my family. Then on the 2016 Giro, I had a reset, I blocked my ears and I realised that I had to go my own way, decisively.”