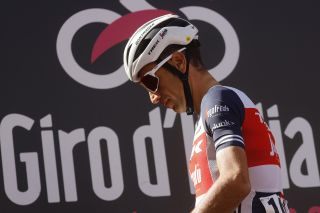 The season with two winters led to an autumn Giro d'Italia that might yet bring the gruppo through banks of snow in the Alps. The most unprecedented year is culminating with the most unpredictable Giro, but the race's most consistent rider of the past decade is seeking to be a rare constant amid the chaos.

Vincenzo Nibali's build-up to the corsa rosa was beset by uncertainty. By his own admission, the 35-year-old had been struggling for form since the cycling season resumed following the coronavirus lockdown, but the opening eight days of the Giro have surely assuaged those doubts. In this once-in-a-lifetime Giro, Nibali's status as a favourite is the same as it ever was.

It was hard to draw conclusions from his opening time trial in Palermo, where his display was mitigated by an unfavourable scirocco wind. Two days later, amid the friendly confines of Mount Etna, the two-time winner offered a rather firmer indication of his overall credentials, finishing in an elite group of favourites on a day that saw a brace of lofty challenges deflated. On the road to Brindisi on Friday, when the peloton shattered in the crosswinds, meanwhile, Nibali was one of the few GC men to make the split.

"Here at the Giro, we were living day to day a bit up until Etna," Nibali's coach Paolo Slongo told Cyclingnews. "But between the time trial and the Etna stage, you could start to understand where you were relative to your rivals. We understood that we could compete with the others for the maglia rosa in Milan."

Another telling day awaits on stage 9 on Sunday, which features the Passo Lanciano, Passo San Leonardo and Bosco di Sant'Antonio en route to a summit finish at Roccaraso. Ahead of that rendezvous, Nibali lies fifth overall, 1:01 behind leader João Almeida (Deceuninck-QuickStep) and just ahead of men like Steven Kruijswijk (Jumbo-Visma) and Jakob Fuglsang (Astana).

Two of the pre-race favourites, meanwhile, have already exited the stage. Geraint Thomas (Ineos) was forced to abandon after fracturing his pelvis on stage, while Simon Yates (Mitchelton-Scott) left the race on Saturday after testing positive for COVID-19.

"The most touted rivals aren't here now, but the others always have to be respected, as we saw last year with [Richard] Carapaz. We don't know how far riders like Kelderman and the current maglia rosa Almeida could go," Slongo said. "If you look at Almeida's record, he's a rider who's won the Tour de l'Avenir, so he's certainly not an unknown."

Slongo's main concern, of course, is the state of Nibali's form. He has overseen the Sicilian's training at Liquigas, Astana, Bahrain-Merida and now Trek-Segafredo, and he acknowledged the obvious: neither he nor Nibali have known a build-up to a Giro anything like this one.

The race was always intended to be the centrepiece of Nibali's 2020 calendar and in March, when the COVID-19 pandemic forced the postponement of Tirreno-Adriatico, the Sicilian changed his programme to ride Paris-Nice, still with an eye towards a May Giro d'Italia. By the time he placed fourth overall atop La Colmiane a week later, the Giro had been postponed and the entire season looked uncertain.

When competition eventually resumed in August, Trek-Segafredo handed Nibali an entirely Italian race programme to avoid the risks posed by international travel (beyond, of course, trips by road to and from his home just over the Swiss border in Lugano). The trade-off was a dearth of stage racing. Nibali lined out in eight one-day races on Italian roads in August, but his lone multi-day event before the Giro came at Tirreno-Adriatico, where he placed a low-key and concerned 19th overall.

"Vincenzo was always among the best in one-day races like Lombardia. We went back to altitude after that, and then Tirreno-Adriatico was a bit difficult because Vincenzo, as a champion, would always like to compete with the best," said Slongo.

Although Nibali's meagre diet of stage racing marked a change from years past, the methodical build-up and stint at altitude were familiar. With occasional exceptions like 2013, when he won the Giro del Trentino immediately prior to his first Giro victory, Nibali only occasionally sparkled in his final stage race ahead of a major objective.

"This year was like having two seasons and two winters. Everything had to be replanned, and I think people who accelerated their programmes too much paid for it in the end, as we saw at the Tour," Slongo said. "In my experience, if an athlete goes through the stages of preparation too quickly and skips some steps, their level of performance and endurance after three weeks is different.

"We did what we've done throughout Vincenzo's career: a step by step build-up that brings you to form right before the big objective. That maybe guarantees that when you do hit form, you can hold it for a month. While you're working to reach that peak of form, you're still missing something and maybe Vincenzo suffered from a psychological standpoint because of that. But we've come in here well, so we'll see how it goes."

This rescheduled Giro is, of course, a most novel edition of the race, from the imposition of a protective 'bubble' around the riders and their teams, to the simple fact that this is the latest edition of the race in history. Although a Giro in May usually has its own fluctuations in temperature – witness the frigid conditions during Nibali's 2013 triumph – an Autumn race offers a new kind of challenge. Nibali can draw confidence from his track record in October racing, most notably his brace of Il Lombardia wins in 2015 and 2017, even if the context was very different.

"Vincenzo has historically always gone well in October because he's done the Vuelta and arrived motivated for the end of the season," Slongo said. "But he's also never suffered from changes in temperature. In the cold and the heat, he's always been consistent and that's important. There have been big variations in temperature already, and we don't know what we'll encounter in the last week: we could find rain, hail, snow or shine."

There was a sense at Etna on Monday that the man for all seasons was warming to his task after an uncertain build-up. Sunday's mammoth stage to Roccaraso, with some 4,000 metres of total climbing, will surely reveal more.