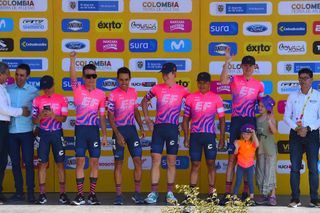 EF Pro Cycling general manager Jonathan Vaughters told Cyclingnews Tuesday at Tour Colombia 2.1 that taking multiple leaders to the Tour is not so much a trend as it is a response to the commercial pressure teams face from sponsors.

"I think it depends a lot on what you've done recruiting-wise and the circumstances going into the race," Vaughters said. "I don't think having multiple leaders is necessarily a trend, but what I do think is that more and more teams are putting more and more emphasis on the Tour.

Team Ineos went into the 2019 Tour with Bernal and Thomas, who was the defending champion at the time, while Froome was out with injury. That roster worked out well for the British powerhouse team, as Bernal scored the first-ever Tour victory by a Colombian and the team's seventh Tour win in eight years.

As Movistar can attest, going into a Tour with multiple leaders can be a tricky business, but Vaughters said it can also be a positive.

"With a singular leader you can support one guy better," he said. "You can keep one guy out of crashes better because everyone is pulling to keep him at the front of the race. With three guys they're more spread out and it's harder to keep them in the front because you've got less horsepower to support each one.

"But at the same point in time, if one of them does crash, you've still got two more. So the strategy, one way or the other, there's advantages and disadvantages both ways."

Vaughters also said things can change dramatically in the months leading up to the Tour.

"With Jumbo-Visma, I see that as real. With Ineos, I think by the time we hit the Tour de France, Bernal will be more established as the absolute leader," he said. "That's just my gut on that."

As for his own team's Tour de Frace roster, Vaughters told Cyclingnews it is beginning to take shape.

"You don't want guys fighting each other for places on the Tour, so it's not that we make a competition out of it; it's just that we're just maybe a little more secretive about our process."