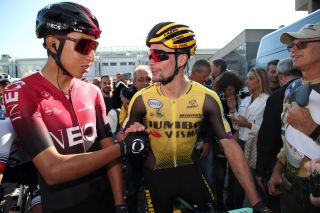 Egan Bernal (Team Ineos) has identified Primož Roglič (Jumbo-Visma) as his chief rival for the 2020 Tour de France, and has outlined the need to attack early in the race in order to create a buffer ahead of the final time trial.

Bernal won the Tour de France last year after divesting Julian Alaphilippe of the yellow jersey in the Alps in the final week. Roglic did not ride the Tour but placed third at the Giro d’Italia before winning the Vuelta a España, confirming his breakthrough as a Grand Tour rider.

The pair are set to clash at the Tour this summer as the spearheads of a highly-anticipated battle between Bernal’s Team Ineos and a bolstered Jumbo-Visma squad.

"He’s a rider who has gained the respect of everyone in the peloton," Bernal said in an interview with Colombian newspaper El Tiempo ahead of the Tour Colombia 2.1.

"He was the number one in the rankings last year, he won the Vuelta, was on the podium in the Giro, is very good in time trials, climbs very well, and is very consistent.

"You can’t write anyone off. Last year Alaphilippe almost won the Tour and no one had him among the favourites. Anything can happen but, for me, Roglic is the one who’ll be the strongest."

In the same way that Bernal is one of three leaders at Team Ineos, alongside Geraint Thomas and Chris Froome, Roglic is one of a number of options for Jumbo-Visma, who also have Tom Dumoulin, winner of the 2017 Giro, and Steven Kruijswijk, third at last year’s Tour.

While Frenchmen Alaphilippe and Thibaut Pinot both came close to winning last year’s Tour, Bernal predicted the Ineos-Jumbo contest will shape the race.

"It’s something that will be great to see, interesting. It will be much more of a battle. Each year the Tour is won with smaller gaps because there are many more rivals and people are much better prepared. This year, with Jumbo, it’s a good thing for the race," he said.

"Dumoulin will be an important rider. He’s someone who, when he’s going well, can climb even better than a climber. You have to pay him a good deal of respect. We don’t know how he’ll be after the injury he had but I think he’ll be good and we’ll have to respect him."

With Roglic and Dumoulin among the very best time triallists in the world, Bernal knows the tactical complexion of the race will be shaped by the penultimate-day time trial to the top of La Planche des Belles Filles.

Although the six-kilometre ascent favours the climbers, the other 30km are largely flat, and Bernal – by no means a weak time triallist himself – is aware he’ll need to already be in yellow with a handsome margin.

"When each rider sets off, he’ll know how much time he needs. On what’s practically the final stage, you estimate a time with which you need to finish to win the Tour," he said.

"Although the final six kilometres are uphill, they are still going to suit the experts because they will be able to regulate their effort much better. More or less I’d have to get there with a minute or 90 seconds – and I’m not being exact – to win the Tour. That’s the difference that stage can make at the end of the race.

"We have to start gaining time from the start in order to get to the time trial with a decent advantage and not lose the Tour that day."