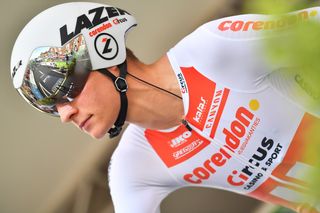 Mathieu van der Poel (Corendon-Circus) regained his overall lead at the Tour of Britain after a solid performance in the individual time trial on stage 6. The young Dutchman finished sixth on the stage, 12 seconds behind winner Edoardo Affini (Mitchelton-Scott) to move back into the leader’s jersey with a six-second lead over Affini's teammate Matteo Trentin.

Van der Poel, who is using the Tour of Britain as part of his training for the World Championships later this month, hinted that he might go on the attack over the final two days of the British race as he looks to seal the overall title in what will be the longest race of his career.

"They've told me that tomorrow is going to be another uphill finish and that suits me. I'll try my best to be up there, and we've shown already that we have a few strong riders here to control the race. I've got confidence for tomorrow," van der Poel said in his post-stage press conference.

Asked if he would use attack as the best form of defense with two days to go, the Amstel Gold winner replied: "It depends on how the legs are. When I feel good I always try and make a move. We'll see."

Remarkably, this was Van der Poel's first competitive time trial since his junior days, but the multi-talented rider showed no signs of inexperience as he took on the deceptively difficult course through the British countryside.

The field might not have contained the very best time trialists in the world, but Van der Poel still put time into the likes of Dutch and British national champions Jos Van Emden (Jumbo-Visma) and Alex Dowset (Katusha-Alpecin), respectively, while the likes of Mikel Landa (Movistar) and Gianni Moscon (Team Ineos) were brushed aside with relative ease.

"I'm delighted of course," the new race leader said. "It's been a really long time since I did a time trial. I'm happy with the result. Ahead of the Worlds, of course, an individual time trial on such a hard course is really good indication. My legs felt really good today, so let's hope that in the coming days that things will be as good. It's a really close battle with Matteo for the first place in the race. He's already shown his really fast legs to get bonus seconds, so it's going to be a proper fight.

"I kind of surprised myself," Van der Poel said. "The last real time trial that I did was when I was a junior. It was a long time ago, but I'm happy with the performance. I'm happy with how it went out there."

Trentin has far from surrendered the race, and the Italian will be looking to take a morale-boosting GC win ahead of the UCI Road World Championships next month. Trentin's better sprint on the flat could be all-important when it comes to bonus seconds, but how Van der Poel destroyed the field on the last uphill finish on stage 4 will have the rest of the peloton on their guard.

"It's going to be a hard race for sure," Van der Poel acknowledged.

"Matteo is my closest opponent, and he showed already that he's fast at the end. With the bonus seconds, it's going to be a really hard battle until the last day."