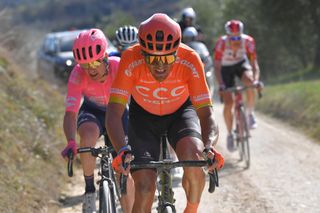 Mathieu van der Poel, Wout van Aert, and Remco Evenepoel are driving generational change in the peloton but Greg van Avermaet is not yet ready to step aside and fancies his chances against his young rivals at Strade Bianche, convinced he still has a future as a team leader even if the CCC Team struggles to find a new backer for 2021.

"I think my condition is good enough. I always start Strade Bianche with the thought of winning it, even if I feel in the dark about everyone else's chances," the 35-year-old Belgian said, talking to the media in Tuscany before a final ride to study the dry and dusty gravel roads.

"I’m really excited. I think everyone has been looking forward to this moment for a long time. We’re finally racing again which is why we have been training and preparing. The calendar is really challenging because it’s so busy, so it’s really important to keep a good condition the whole time.

"I’m definitely aiming to win a big classic, a Monument, but all of the races I’m doing are really important so I would like to win any of them."

Van Avermaet watched Evenepoel win at the Vuelta a Burgos and will take on Van der Poel, Van Aert and everyone else at Strade Bianche.

He has a very different race programme to Evenepoel, who will target the Giro d'Italia and not the Classics in October but the two are competing for the support and attention of the Belgian cycling fans.

"I watched his performance carefully yesterday. I have the impression that guy has no limit," he said of Evenepoel. "The progress he has made in a few months is enormous. I'm very curious about what he will do in Lombardy and the Giro d'Italia."

Like many of his rivals, Van Avermaet has recently been training at altitude and was surprised by the heat of the Tuscan summer. 37°C temperatures are forecast for Saturday afternoon, with the dry dirt roads far more technically demanding than in early March.

"It’s going to be really hot so that’s going to be a shock for everyone I think," he warned. "I have been in Livigno at altitude so it was much cooler there but normally, I prefer to race in warmer weather than the cold so hopefully it will suit me more.

"The strade looks a little different now than it does in March. It’s more stoney than what we are used to so we’re going to ride 28mm tires with lower pressure which should allow us to go a bit faster. It hasn't rained here for three weeks, so the stones are a bit looser than usual. I also had that feeling during training. There's more dust too; if you ride over it with a peloton, that's a risk, so it will be a slightly more dangerous edition. I hope to survive on the first gravel sectors and hope for an early selection.

"I think it is the same guys who are always good here who will be the favorites: Kwiatkowski, Fuglsang, Alaphilippe, Van der Poel, Van Aert. Those guys are really good on the gravel so they’re the guys who will probably be up there again."

Loyal to CCC Team, for now

The UCI rider transfer window opens on August 1, with riders and teams permitted to announce their 2021 signings. Van Avermaet has been linked to AG2R La Mondiale but has always tried to stay loyal to CCC Team owner Jim Ochowicz.

He again opted for a diplomatic line on Friday but is keeping all his options open.

"I’m still confident the team can find a new sponsor but, of course, I’m also looking to other teams to go to if it doesn’t work out," he said.

"I’m waiting on some news from Jim Ochowicz to see if we can find something and if it’s not possible, of course I will go somewhere else. But for now, I’m concentrating on racing again and then we’ll see."

Van Avermaet gave his interview wearing a mask and two metres away from the media. Other teams have forbid direct interviews but Van Avermaet accepts it as the new normal of the COVID-19 pandemic.

"It is strange to talk to you here with a mouth mask but this is the reality of the coming months," he said. "Hopefully this can be a new start. We're being made to adapt to all kinds of situations. I'm not afraid to pick up the virus here. If everyone does what we have to, I don't expect any problems. We are an outdoor sport and not a contact sport.

"It’s not easy because we're traveling quite a lot, it’s a big peloton, it’s a big bubble. I think the most important is the testing. Seeing who is positive and who is negative and hoping everything in our team can be easily managed. I think [maintaining] these kinds of conditions make it possible to restart racing, which is important for us, for the sponsors and for the whole of cycling."