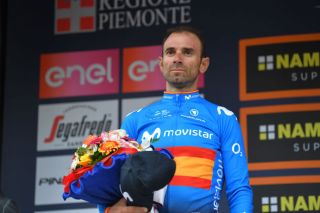 Valverde on the podium at Milano-Torino (Image credit: Getty Images)

Veteran Spanish all-rounder Alejandro Valverde will race the 2020 Tour de France during his build-up for the Olympic Games, his Movistar team manager Eusebio Unzué has confirmed, despite less than a week between when the Tour ends in Paris and the Olympic road race in Tokyo.

"Alejandro doesn't have another race prior to the Olympics that won't be the Tour," Unzué said  at the MARCA Sport Weekend, according to Spanish website Zikloland.

The longstanding Movistar manager recognised that "probably this isn't the ideal preparation, because those who finish the Tour will do so late on a Sunday evening, which is already" - because of the time difference - "the following day in Tokyo."

WADA identifies the DNA of 11 athletes implicated in Operacion Puerto

"So they won't arrive in Japan until Tuesday at the earliest, and they won't have time to adapt to the time difference or climate there," Unzue said. "But I don't think that will be a problem for Alejandro."

Early reports of time scheduling of next year's Tour say the race's final stage is due to finish a few hours earlier than in 2019, when it concluded at after 8pm. The 2020 Tour has already moved forward a week in order not to clash with the Games.

"If he finishes the Tour, as I hope he will, we'll try to ensure he reaches there [the Games] in the best condition possible," Unzue commented. "If he did another race as build-up he might be fresher, but he'd be lacking the form he gets from racing a Grand Tour."

Valverde's choice of the Tour de France is different to two other major stars eying the Games, Vincenzo Nibali and Romain Bardet, who are both opting for the Giro d'Italia rather than racing the three-week Grand Tour in July.

Valverde finished ninth in this year's Tour de France, a race he has ridden 12 times. He was the victim of a very bad crash and fractured knee on the opening stage in 2017 which saw him abandon immediately, with his best result third overall in 2015.

He also taken three stage wins, one in 2012, another in 2008, when he led the race for two days, and another in 2005 ahead of Lance Armstrong at Courchevel during his debut participation in the Tour.

Valverde's first participation at the Olympic Games was in 2004, when he finished 47th in the Road-Race. Since then, he has finished 12th in Beijing in 2008 (after racing the Tour, albeit with a bigger time gap of nearly two weeks between the two events), 18th in London and 30th in Rio.

Turning 40 next April, Valverde is thought to be contemplating retiring after Tokyo, but as of yet, no final decision has been confirmed.