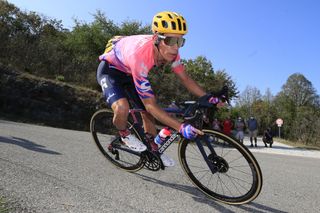 Stage 15 of the Tour de France on Sunday provided a day of mixed emotions for American WorldTour squad EF Pro Cycling, with Rigoberto Uran sticking with the race's best climbers on the summit finish on the Grand Colombier to move up to third overall, while Sergio Higuita was forced to leave the race after having been accidentally knocked off his bike by Deceuninck-QuickStep's Bob Jungels earlier on the stage.

Higuita was left with a suspected broken hand – although it was later discovered that nothing was broken – but his Tour is nevertheless over.

The wealth of Colombian climbing talent that started this year's Tour has been decimated as a result of stage 15, with Higuita out and defending Tour champion Egan Bernal (Ineos Grenadiers) and Nairo Quintana (Arkéa-Samsic) both falling out of overall contention.

Only Uran matched the pace set by race leader Primoz Roglic's Jumbo-Visma squad on the final climb of the Grand Colombier, and was content with ninth place on the stage, 18 seconds down on winner Tadej Pogacar (UAE Team Emirates).

Uran will now shoulder Colombian fans' expectations, along with Miguel Angel Lopez (Astana), who is just 11 seconds behind him in fourth place overall.

The 33-year-old Uran finished second to Chris Froome at the 2017 Tour de France, but might be hard-pushed to either equal or better that result this year, with Slovenian riders Roglic and Pogacar seemingly set to dominate the racing in the final week.

Jungels: 'I'm really sorry' for taking Higuita out of the Tour de France

Although he is only 1:34 behind Roglic and 54 seconds down on Pogacar, the bigger battle for Uran is likely to be his defence of third place, from the likes of Lopez, Adam Yates (Mitchelton-Scott), Porte and Bahrain McLaren's Mikel Landa, who are all within 42 seconds of him.

"It's been a difficult day because we've lost a teammate, Sergio, through an accident," Uran said.

"In the end, we have to keep looking forward. We didn't lose too much time on the finish line. The week ahead is an important week, and when you lose a teammate, it makes everyone a bit sad, but we're just relieved that his injuries aren't serious; he's doing OK.

"We've just got to make sure we're focused on going forward right up until the last day."

As for Higuita, he'll be cheering his friend and compatriot from the sidelines, wishing that he was still there to help.

"Rigo is doing really well," the 23-year-old said, who was taking part in his first Tour de France. "He could win the Tour, or at least be on the podium, and I wanted to be there with him.

"I wanted to go to Paris and ride that last stage – I feel quite nostalgic and sad about it – but this is cycling, unfortunately," the Colombian road race champion said. "You learn from these things and they make you stronger."